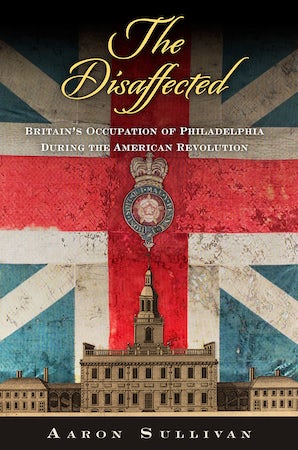 Britain's Occupation of Philadelphia During the American Revolution

Elizabeth and Henry Drinker of Philadelphia were no friends of the American Revolution. Yet neither were they its enemies. The Drinkers were a merchant family who, being Quakers and pacifists, shunned commitments to both the Revolutionaries and the British. They strove to endure the war uninvolved and unscathed. They failed. In 1777, the war came to Philadelphia when the city was taken and occupied by the British army.

Aaron Sullivan explores the British occupation of Philadelphia, chronicling the experiences of a group of people who were pursued, pressured, and at times persecuted, not because they chose the wrong side of the Revolution but because they tried not to choose a side at all. For these people, the war was neither a glorious cause to be won nor an unnatural rebellion to be suppressed, but a dangerous and costly calamity to be navigated with care. Both the Patriots and the British referred to this group as "the disaffected," perceiving correctly that their defining feature was less loyalty to than a lack of support for either side in the dispute, and denounced them as opportunistic, apathetic, or even treasonous. Sullivan shows how Revolutionary authorities embraced desperate measures in their quest to secure their own legitimacy, suppressing speech, controlling commerce, and mandating military service. In 1778, without the Patriots firing a shot, the king's army abandoned Philadelphia and the perceived threat from neutrals began to decline—as did the coercive and intolerant practices of the Revolutionary regime.

By highlighting the perspectives of those wearied by and withdrawn from the conflict, The Disaffected reveals the consequences of a Revolutionary ideology that assumed the nation's people to be a united and homogenous front.

"The Disaffected is an important contribution to scholarship on the American Revolution. In clear, and evocative prose, Sullivan offers a nuanced analysis that refocuses the war on the experiences of those who wanted nothing to do with the conflict. He is a gifted writer, and his ability to tackle complicated historiographical questions in a relatable manner makes this book accessible to undergraduates and the general public . . . In the fraught political atmosphere of revolutionary America, the disaffected were an enigma; they fit uneasily in both their historical moment and national histories of the war. Bringing revolutionary Philadelphia to life, The Disaffected remedies this conundrum and convincingly restores the disaffected to their place in revolutionary politics."—Journal of British Studies

"The Disaffected is an important book. It is carefully researched, thoughtfully argued, and beautifully written. It contributes significantly to the historiography of the American Revolution, expanding our understanding of how political allegiances functioned and shifted during and after the rupture with Britain and the creation of an independent nation. Sullivan’s examination of the occupation of Philadelphia and the large group of people who tried to remain disengaged from the violent politics unfolding around them casts new light on the Revolution, providing us with a window into a complex historical moment."—Early American Literature

"[A] fascinating look at the plight of a group of Philadelphia civilians known as the 'Disaffected' as they experienced the early days of the Revolution and the British take-over of their city."—Journal of the American Revolution

"Beautifully written, The Disaffected uncovers a forgotten but important piece of the American Revolution. Aaron Sullivan is a natural storyteller whose deeply-researched book will change the way we think about Philadelphia's revolutionary history. A must read for scholars and the historically-interested alike."—Patrick Spero, American Philosophical Society