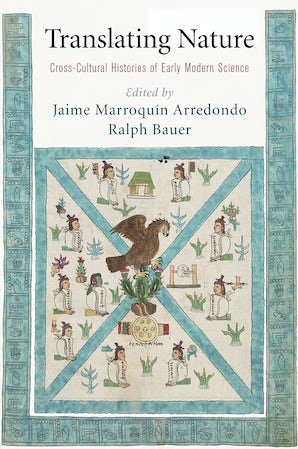 Translating Nature recasts the era of early modern science as an age not of discovery but of translation. As Iberian and Protestant empires expanded across the Americas, colonial travelers encountered, translated, and reinterpreted Amerindian traditions of knowledge—knowledge that was later translated by the British, reading from Spanish and Portuguese texts. Translations of natural and ethnographic knowledge therefore took place across multiple boundaries—linguistic, cultural, and geographical—and produced, through their transmissions, the discoveries that characterize the early modern era. In the process, however, the identities of many of the original bearers of knowledge were lost or hidden in translation.

The essays in Translating Nature explore the crucial role that the translation of philosophical and epistemological ideas played in European scientific exchanges with American Indians; the ethnographic practices and methods that facilitated appropriation of Amerindian knowledge; the ideas and practices used to record, organize, translate, and conceptualize Amerindian naturalist knowledge; and the persistent presence and influence of Amerindian and Iberian naturalist and medical knowledge in the development of early modern natural history. Contributors highlight the global nature of the history of science, the mobility of knowledge in the early modern era, and the foundational roles that Native Americans, Africans, and European Catholics played in this age of translation.

"Translating Nature delivers a colorful and vivid picture of how early modern knowledge production was a collective enterprise, involving well known and, until recently, voiceless actors. The volume's tour the force is two-fold: to bring to the surface previously ignored 'native' knowledge and actors, and to reintroduce Catholic empires, namely the Spanish one, into the master narrative of the Scientific Revolution, whose main heroes have been Francis Bacon and the Protestant empires."—Journal of Early Modern History

"Translating Nature wields a powerful antidote against accounts of the Scientific Revolution that have disingenuously linked the rise of empiricism in the West with northern, Protestant Europe, ignoring the pivotal role that the first overseas empires, Spain and Portugal, played in Europe's discovery of natural and human worlds across the globe. Written by seasoned scholars of the early modern world, this collection of essays reveals a complex information network extending all the way from native informants who provided varied natural and ethnographic knowledge to Iberian institutions and scientists to scientific communities beyond the Pyrenees."—Nicolás Wey Gómez, California Institute of Technology