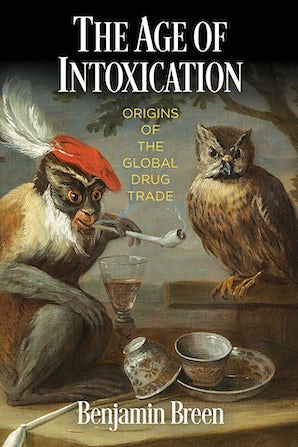 The Age of Intoxication

Origins of the Global Drug Trade

Eating the flesh of an Egyptian mummy prevents the plague. Distilled poppies reduce melancholy. A Turkish drink called coffee increases alertness. Tobacco cures cancer. Such beliefs circulated in the seventeenth and eighteenth centuries, an era when the term "drug" encompassed everything from herbs and spices—like nutmeg, cinnamon, and chamomile—to such deadly poisons as lead, mercury, and arsenic. In The Age of Intoxication, Benjamin Breen offers a window into a time when drugs were not yet separated into categories—illicit and licit, recreational and medicinal, modern and traditional—and there was no barrier between the drug dealer and the pharmacist.

Focusing on the Portuguese colonies in Brazil and Angola and on the imperial capital of Lisbon, Breen examines the process by which novel drugs were located, commodified, and consumed. He then turns his attention to the British Empire, arguing that it owed much of its success in this period to its usurpation of the Portuguese drug networks. From the sickly sweet tobacco that helped finance the Atlantic slave trade to the cannabis that an East Indies merchant sold to the natural philosopher Robert Hooke in one of the earliest European coffeehouses, Breen shows how drugs have been entangled with science and empire from the very beginning.

Featuring numerous illuminating anecdotes and a cast of characters that includes merchants, slaves, shamans, prophets, inquisitors, and alchemists, The Age of Intoxication rethinks a history of drugs and the early drug trade that has too often been framed as opposites—between medicinal and recreational, legal and illegal, good and evil. Breen argues that, in order to guide drug policy toward a fairer and more informed course, we first need to understand who and what set the global drug trade in motion.

Introduction. At the Statue of Adamastor