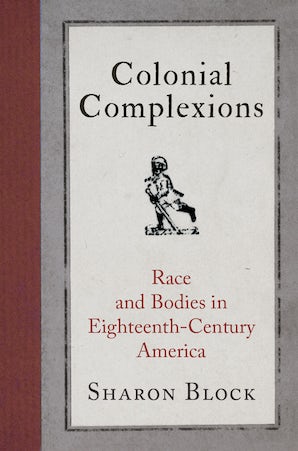 Race and Bodies in Eighteenth-Century America

In Colonial Complexions, historian Sharon Block examines how Anglo-Americans built racial ideologies out of descriptions of physical appearance. By analyzing more than 4,000 advertisements for fugitive servants and slaves in colonial newspapers alongside scores of transatlantic sources, she reveals how colonists transformed observable characteristics into racist reality. Building on her expertise in digital humanities, Block repurposes these well-known historical sources to newly highlight how daily language called race and identity into being before the rise of scientific racism.

In the eighteenth century, a multitude of characteristics beyond skin color factored into racial assumptions, and complexion did not have a stable or singular meaning. Colonists justified a race-based slave labor system not by opposing black and white but by accumulating differences in the bodies they described: racism was made real by marking variation from a norm on some bodies, and variation as the norm on others. Such subtle systemizations of racism naturalized enslavement into bodily description, erased Native American heritage, and privileged life history as a crucial marker of free status only for people of European-based identities.

Colonial Complexions suggests alternative possibilities to modern formulations of racial identities and offers a precise historical analysis of the beliefs behind evolving notions of race-based differences in North American history.

"Colonial Complexions offers an important new angle on the processes through which racial categories became entrenched in American and Western thought and culture . . . [and] a badly needed and deeply insightful analysis of a level of race-making that falls between high scientific discourse and social life . . . Sharon Block reveals a too-often hidden and absolutely crucial current of racial thought and practice in early America."—Journal of Early American History

"Colonial Complexions is a crucial contribution to the history of race and a noteworthy model for digital age historical methodology."—Black Perspectives

"Part of Block's purpose in Colonial Complexions is to prompt historians to think more carefully about echoing without question the descriptions and classifications we find in our sources . . . .Colonial Complexions contributes mightily to the literature on the social construction of race by illuminating the very real effects of those constructions."—Reviews in American History

""Colonial Complexions has done important work to hone our understanding of the role of colonial advertisements in western-Atlantic racial formations, and Block has assembled a valuable archive that remains ripe for future inquiry into the interlinked processes of human monetization and racialization during the period just before the founding of a republic still in their thrall."—Eighteenth-Century Studies

"[T]his is an admirable work of scholarship that provides thoughtful and thorough statistical analysis of a telling but previously neglected archive. The result is to buttress the recent scholarly understanding of the inchoate nature of racial ideology (and even bodily perception) in the third quarter of the eighteenth century in British North America. As much of the scholarly work toward redefining our understandings of race in this key period has been done by literary and theoretically oriented scholars, the support of Block's careful statistical analysis, and her compelling presentation of it, should prove invaluable to the ongoing debate on this always contentious issue.""—Early American Literature

"By employing digital methods to interrogate the process of race-making in the eighteenth-century, Colonial Complexions makes visible the cultural worldview underlying racial formations and pushes scholarship in exciting new directions."—Journal of Southern History

"In Colonial Complexions, historian Sharon Block offers a subtle and profound reading of the processes of race-making in colonial North America. Drawing on thousands of advertisements for the return of servant and enslaved laborers of African, European, and Native American descent, Block offers a careful and critical reading of how colonial slave and contract owners consolidated racial meaning on bodies through specific language, evaluation, and the naturalization of status over the eighteenth century. After reading this book, scholars will be compelled to deconstruct colonial terms of racial designation that have been uncritically reproduced and to change the way we think and write about race and racial meaning in the past and the effects of these terms in our present."—Marisa Fuentes, Rutgers University

"A powerful history of complexion and how it mobilized across race, labor, and hierarchy in colonial slavery. Colonial Complexions asks us to think carefully about the processes of race-making. Sharon Block's engagement with the history of the body and the meanings ascribed to color represents foundational work in the history of racial formation and power in early America."—Jennifer L. Morgan, New York University

"Colonial Complexions is remarkable. Through an astonishing amount of research and the analysis of thousands of advertisements for missing persons in colonial newspapers, Sharon Block determines when and how 'race' acquired its meaning and basic equation with slavery. In this innovative way, she argues that race and slavery came to be intertwined through seemingly innocuous descriptions."—Elizabeth Reis, Macaulay Honors College, City University of New York