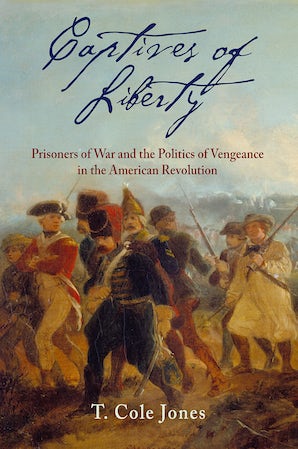 Contrary to popular belief, the American Revolutionary War was not a limited and restrained struggle for political self-determination. From the onset of hostilities, British authorities viewed their American foes as traitors to be punished, and British abuse of American prisoners, both tacitly condoned and at times officially sanctioned, proliferated. Meanwhile, more than seventeen thousand British and allied soldiers fell into American hands during the Revolution. For a fledgling nation that could barely afford to keep an army in the field, the issue of how to manage prisoners of war was daunting.

Captives of Liberty examines how America's founding generation grappled with the problems posed by prisoners of war, and how this influenced the wider social and political legacies of the Revolution. When the struggle began, according to T. Cole Jones, revolutionary leadership strove to conduct the war according to the prevailing European customs of military conduct, which emphasized restricting violence to the battlefield and treating prisoners humanely. However, this vision of restrained war did not last long. As the British denied customary protections to their American captives, the revolutionary leadership wasted no time in capitalizing on the prisoners' ordeals for propagandistic purposes. Enraged, ordinary Americans began to demand vengeance, and they viewed British soldiers and their German and Native American auxiliaries as appropriate targets. This cycle of violence spiraled out of control, transforming the struggle for colonial independence into a revolutionary war.

In illuminating this history, Jones contends that the violence of the Revolutionary War had a profound impact on the character and consequences of the American Revolution. Captives of Liberty not only provides the first comprehensive analysis of revolutionary American treatment of enemy prisoners but also reveals the relationship between America's political revolution and the war waged to secure it.

Jones has succeeded brilliantly in redefining how we understand the role of prisoners of war and their treatment in determining the course of the American War of Independence. In so doing, he offers unique insights into the founders and the founding of the country . . . Jones has provided a new outlook on the American War of Independence through a unique and innovative lens . . . Captives of Liberty is an insightful and magnificent achievement, providing a major contribution to the literature on the period. History: Reviews of New Books

[A] very comprehensive yet relatively concise treatise on the largely overlooked area of prisoner treatment during the Revolution. It is highly readable and engaging and deserves a place on the shelf of any student of this period in history. Jones's work provides a fresh take on the conflict's character and the central role prisoners held in shaping it that shifts perceptions of both the conflict itself as well as our national historical memory of it. Journal of the American Revolution

An ambitious and impressive book, Captives of Liberty offers a fresh interpretation of the American Revolution that will be required reading for scholars of the era. Journal of the Early Republic

As T. Cole Jones reminds us in his timely and compelling monograph, the violence of the American Revolution was not only profound, but also profoundly important in shaping the nature of the contest. Jones focuses on the prisoners of war who were at the epicentre of suffering in the Revolution . . . Jones is to be commended for this invaluable contribution to our understanding of the ways in which a War for Independence became a destructive Revolutionary War that had far-reaching political effects. Social History

Jones’s work is pathbreaking in examining an aspect of the Revolutionary War that has received little attention from modern historians: much has been written about British treatment of American prisoners, but relatively little about the reverse… Jones has presented a well-written and engaging account of violence against prisoners, and he truly does illuminate a little studied aspect of the Revolutionary War. Captives of Liberty is well worth reading, and it will be of interest to both military historians and those who consider civil-military relations. Journal of British Studies

In Captives of Liberty, T. Cole Jones deftly challenges perceptions of a 'civilized' and restrained American Revolution by illuminating how the management of prisoners, whether inadvertently dire due to provisioning problems or deliberately grim as a political weapon, tracks a course of escalation from proportional retaliation to bloody revenge in the conflict. This superb and engrossing study presents a war not only for but also between hearts and minds when the treatment of captives put popular sentiments, political decisions, and military custom at odds in a struggle to reconcile emotions and vengeance with law, order, and honor. Holly Mayer, author of Belonging to the Army: Camp Followers and Community during the American Revolution