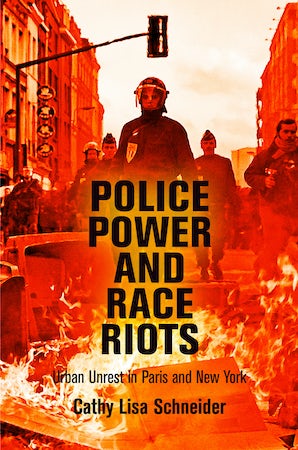 Three weeks after Lyndon Johnson signed the Civil Rights Act of 1964, a New York City police officer shot and killed a fifteen-year-old black youth, inciting the first of almost a decade of black and Latino riots throughout the United States. In October 2005, French police chased three black and Arab teenagers into an electrical substation outside Paris, culminating in the fatal electrocution of two of them. Fires blazed in Parisian suburbs and housing projects throughout France for three consecutive weeks. Cathy Lisa Schneider explores the political, legal, and economic conditions that led to violent confrontations in neighborhoods on opposite sides of the Atlantic half a century apart.

Police Power and Race Riots traces the history of urban upheaval in New York and greater Paris, focusing on the interaction between police and minority youth. Schneider shows that riots erupted when elites activated racial boundaries, police engaged in racialized violence, and racial minorities lacked alternative avenues of redress. She also demonstrates how local activists who cut their teeth on the American race riots painstakingly constructed social movement organizations with standard nonviolent repertoires for dealing with police violence. These efforts, along with the opening of access to courts of law for ethnic and racial minorities, have made riots a far less common response to police violence in the United States today. Rich in historical and ethnographic detail, Police Power and Race Riots offers a compelling account of the processes that fan the flames of urban unrest and the dynamics that subsequently quell the fires.