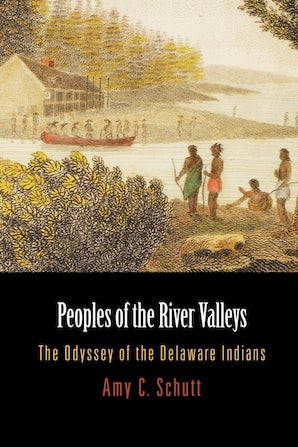 Peoples of the River Valleys

The Odyssey of the Delaware Indians

Seventeenth-century Indians from the Delaware and lower Hudson valleys organized their lives around small-scale groupings of kin and communities. Living through epidemics, warfare, economic change, and physical dispossession, survivors from these peoples came together in new locations, especially the eighteenth-century Susquehanna and Ohio River valleys. In the process, they did not abandon kin and community orientations, but they increasingly defined a role for themselves as Delaware Indians in early American society.

Peoples of the River Valleys offers a fresh interpretation of the history of the Delaware, or Lenape, Indians in the context of events in the mid-Atlantic region and the Ohio Valley. It focuses on a broad and significant period: 1609-1783, including the years of Dutch, Swedish, and English colonization and the American Revolution. An epilogue takes the Delawares' story into the mid-nineteenth century.

Amy C. Schutt examines important themes in Native American history—mediation and alliance formation—and shows their crucial role in the development of the Delawares as a people. She goes beyond familiar questions about Indian-European relations and examines how Indian-Indian associations were a major factor in the history of the Delawares. Drawing extensively upon primary sources, including treaty minutes, deeds, and Moravian mission records, Schutt reveals that Delawares approached alliances as a tool for survival at a time when Euro-Americans were encroaching on Native lands. As relations with colonists were frequently troubled, Delawares often turned instead to form alliances with other Delawares and non-Delaware Indians with whom they shared territories and resources. In vivid detail, Peoples of the River Valleys shows the link between the Delawares' approaches to land and the relationships they constructed on the land.

Chapter 1. Communities and Kin
Chapter 2. Reorganizations and Relationships in the Hudson and Delaware Valleys, 1609-1682
"He knew the best how to order them"
Chapter 3. Sharing Lands and Asserting Rights in the Face of Pennsylvania's Expansion, 1682-1742
Chapter 4. Networks, Alliances, and Power, 1742-1765
"All the people which inhabit this Continent"
Chapter 5: Defining Delawares, 1765-1774
Chapter 6: Striving for Unity with Diversity, 1768-1783

Epilogue: "Sit down by us as a Nation"