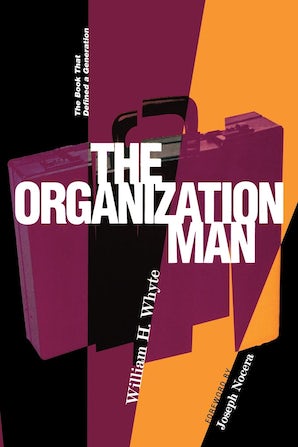 Regarded as one of the most important sociological and business commentaries of modern times, The Organization Man developed the first thorough description of the impact of mass organization on American society. During the height of the Eisenhower administration, corporations appeared to provide a blissful answer to postwar life with the marketing of new technologies—television, affordable cars, space travel, fast food—and lifestyles, such as carefully planned suburban communities centered around the nuclear family. William H. Whyte found this phenomenon alarming.

As an editor for Fortune magazine, Whyte was well placed to observe corporate America; it became clear to him that the American belief in the perfectibility of society was shifting from one of individual initiative to one that could be achieved at the expense of the individual. With its clear analysis of contemporary working and living arrangements, The Organization Man rapidly achieved bestseller status.

Since the time of the book's original publication, the American workplace has undergone massive changes. In the 1990s, the rule of large corporations seemed less relevant as small entrepreneurs made fortunes from new technologies, in the process bucking old corporate trends. In fact this "new economy" appeared to have doomed Whyte's original analysis as an artifact from a bygone day. But the recent collapse of so many startup businesses, gigantic mergers of international conglomerates, and the reality of economic globalization make The Organization Man all the more essential as background for understanding today's global market. This edition contains a new foreword by noted journalist and author Joseph Nocera. In an afterword Jenny Bell Whyte describes how The Organization Man was written.

PART I. THE IDEOLOGY OF ORGANIZATION MAN
1. Introduction
2. Decline of the Protestant Ethic
3. Scientism
4. Belongingness
5. Togetherness

PART II. THE TRAINING OF ORGANIZATION MAN
6. A generation of Bureaucrats
7. The Practical Curriculum
8. Business Influence on Education
9. The Pipe Line
10. The "Well-Rounded" Man

PART IV. THE TESTING OF ORGANIZATION MAN
14. How Goon an Organization Man Are You?
15. The Tests of Conformity
PART V. THE ORGANIZATION SCIENTIST
16. The Fight against Genius
17. The Bureaucratization of the Scientist
18. The Foundations and Projectism

PART VI. THE ORGANIZATION MAN IN FICTION
19 Love That System
20. Society As Hero

PART VII. THE NEW SUBURBIA: ORGANIZATION MAN AT HOME
21. The Transients
22. The New Roots
23. Classlessness in Suburbia
24. Inconspicuous Consumption
25. The Web of Friendship
26. The Outgoing Life
27. The Church of Suburbia
28. The Organization of Children
29. Conclusion

Appendix: How to Cheat on Personality Tests
Acknowledgments
Index

Recognized as a benchmark, Whyte's book reveals the dilemmas at the heart of the group ethos that emerged in the corporate and social world of the postwar era. Nathan Glazer

The Organization Man is one of the most influential books of the twentieth century. It established the categories Americans now use when thinking about the workplace, the suburbs, and their lives. David Brooks, senior editor at the Weekly Standard and contributing editor at Newsweek