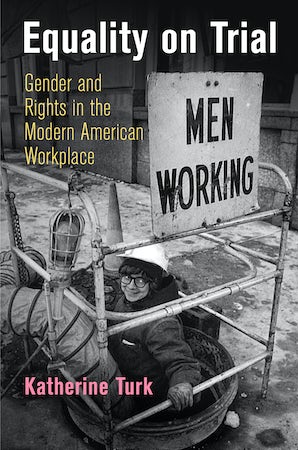 Gender and Rights in the Modern American Workplace

In 1964, as part of its landmark Civil Rights Act, Congress outlawed workplace discrimination on the basis of such personal attributes as sex, race, and religion. This provision, known as Title VII, laid a new legal foundation for women's rights at work. Though President Kennedy and other lawmakers expressed high hopes for Title VII, early attempts to enforce it were inconsistent. In the absence of a consensus definition of sex equality in the law or society, Title VII's practical meaning was far from certain.

The first history to foreground Title VII's sex provision, Equality on Trial examines how the law's initial promise inspired a generation of Americans to dispatch expansive notions of sex equality. Imagining new solidarities and building a broad class politics, these workers and activists engaged Title VII to generate a pivotal battle over the terms of democracy and the role of the state in all labor relationships. But the law's ambiguity also allowed for narrow conceptions of sex equality to take hold. Conservatives found ways to bend Title VII's possible meanings to their benefit, discovering that a narrow definition of sex equality allowed businesses to comply with the law without transforming basic workplace structures or ceding power to workers. These contests to fix the meaning of sex equality ultimately laid the legal and cultural foundation for the neoliberal work regimes that enabled some women to break the glass ceiling as employers lowered the floor for everyone else.

Synthesizing the histories of work, social movements, and civil rights in the postwar United States, Equality on Trial recovers the range of protagonists whose struggles forged the contemporary meanings of feminism, fairness, and labor rights.

"Turk explains how sex equality at work came to be defined as women's access to the same jobs as men, with no acknowledgment of differences due to motherhood or consideration of the unpaid labor necessary to care for a family. . . . Turk's innovative and deeply researched book is essential reading for anyone interested in the history of women's labor and social policy."—American Historical Review

"A truly original, deeply researched, eye-opening new account of the last half century of U.S. history that puts the struggle over gender and economic justice at its center."—Dorothy Sue Cobble, Rutgers University

"Exhaustively researched and cogently argued, Equality on Trial transforms how we think of the 1964 Civil Rights Act's inclusion of sex."—Eileen Boris, University of California Santa Barbara