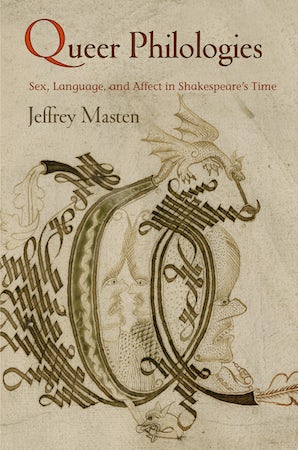 "Masten has much to teach us about the consequence of learning to hear how words resonated for Shakespeare's first audiences, and how they can be made to sound and resound today. . . . As Masten indicates, queer philology need not be confined to the study of terms used to describe and 'inscribe' sex and gender, but should be extended to include all the terms of the social exclusions that currently concern us."—Times Literary Supplement

"A groundbreaking new study. . . . Queer Philologies should prove a seminal work for literary critics, sexual historians, queer theorists, and textual editors. Animated by Masten's witty prose, deeply enmeshed in the relevant scholarship, and often breathtaking in its acuity, originality, and capaciousness of thought, it is the most pleasurable polemic in recent literary history."—Review of English Studies

"[A] tour de force of erudition and intellectual wit that maps out a new region of scholarship: 'queer philology.' . . . Masten undertakes a vast philological program to show how vagaries and occluded regularities of early modern sex/gender vocabularies are intimately woven into specific traits of early modern orthography, rhetorical structures, etymologies, and familial bonds between words and word clusters."—SEL Studies in English Literature 1500-1900

"A careful and thought-provoking study . . . with stunning insight and extremely thoughtful attention to detail. Queer Philologies suggests exciting new possibilities in one of the foundational fields of literary study."—Comparative Drama

"Queer Philologies, Jeffrey Masten's brilliant new book, makes the queerness of linguistic relations into the stuff of a genuine page-turner. Doing nothing less than reinventing the field of philology for the twenty-first century, Masten charts striking moments in the two-way traffic between words and world, exploring how accident and error figure in the shaping of sexuality and multiply its significations beyond all scholarly control. To dip into this book is to recognize that it's destined to become a classic, one of the works without which queer theory and early modernism no longer can be thought."—Lee Edelman, Tufts University

"A masterpiece as well as a great intellectual joy. Masten finds in philology and in the history of the book a new approach to the analysis of norms and normativities-that is, to practices of standardization, including the standardization of sex and gender. This queer manifesto for the mutual implication of the history of sexuality and the materiality of language is as powerful as it is scrupulous, as original as it is radical. No one who reads this book will ever think of the letter Q in the same way again."—David Halperin, University of Michigan

"Jeffrey Masten's witty and searching book will help a new generation of students to recover the philological grounds for the early modern period's sexual relations and gender constructions. Deploying and extending his signature combination of queer theory and textual scholarship, Masten gives us startling new readings of key works, words, and even letters that leave them looking very queer indeed."—William Sherman, Victoria and Albert Museum