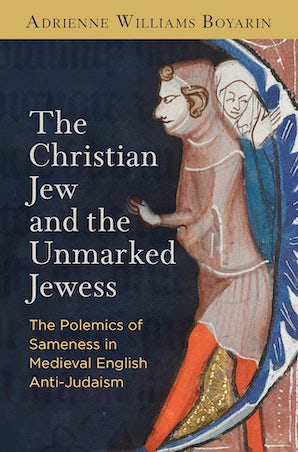 The Christian Jew and the Unmarked Jewess

The Polemics of Sameness in Medieval English Anti-Judaism

In the Plea Rolls of the Exchequer of the Jews, Trinity Term 1277, Adrienne Williams Boyarin finds the case of one Sampson son of Samuel, a Jew of Northampton, arrested for impersonating a Franciscan friar and preaching false Christianity. He was sentenced to walk for three days through the centers of London, Canterbury, Oxford, Lincoln, and Northampton carrying the entrails and flayed skin of a calf and exposing his naked, circumcised body to onlookers. Sampson's crime and sentence, Williams Boyarin argues, suggest that he made a convincing friar—when clothed. Indeed, many English texts of this era struggle with the similarities of Jews and Christians, but especially of Jewish and Christian women. Unlike men, Jewish women did not typically wear specific identifying clothing, nor were they represented as physiognomically distinct. Williams Boyarin observes that both before and after the periods in which art historians note a consistent visual repertoire of villainy and difference around Jewish men, English authors highlight and exploit Jewish women's indistinguishability from Christians. Exploring what she calls a "polemics of sameness," she elucidates an essential part of the rhetoric employed by medieval anti-Jewish materials, which could assimilate the Jew into the Christian and, as a consequence, render the Jewess a dangerous but unseeable enemy or a sign of the always-convertible self.

The Christian Jew and the Unmarked Jewess considers realities and fantasies of indistinguishability. It focuses on how medieval Christians could identify with Jews and even think of themselves as Jewish—positively or negatively, historically or figurally. Williams Boyarin identifies and explores polemics of sameness through a broad range of theological, historical, and literary works from medieval England before turning more specifically to stereotypes of Jewish women and the ways in which rhetorical strategies that blur the line between "saming" and "othering" reveal gendered habits of representation.

"The Christian Jew and the Unmarked Jewess is remarkable, nothing short of paradigm changing. The book will be an essential resource for scholars and students of medieval studies, Jewish studies, and those interested in the formation of proto-racial discourses. The book’s careful readings of 'understudied' medieval texts and documents is a significant advantage; too many studies of Jewish representation in medieval texts focus on the same few literary and visual repertoires. Williams Boyarin’s voice is original and masterful."—Medieval Encounters

"Any engagement with Boyarin’s book must, of necessity, pay tribute to the intellectual brilliance here displayed. It is rare to read a book on such a well-studied subject that nevertheless feels so vitally new, so provocatively urgent. Boyarin’s readings are superb, and highly diverse...Boyarin’s intellectual creativity offers a uniquely interdisciplinary perspective on how likeness could be as much (or more) of a crisis than difference for medieval Christians living in close proximity to Jews."—Journal of Medieval Religious Cultures

"“The breadth and depth of Boyarin’s analysis is stunning. As comfortable with Anglo-Norman and Latin as she is with early English, Boyarin skillfully examines an array of materials, from visual culture, to legal, devotional, literary and historical sources. Importantly, many of those primary materials have not appeared in analyses of the medieval Anglo-Jewry, largely because it is only by training our gaze on similitude and not difference that such texts and images become relevant. By expanding the archive in this manner, Boyarin has laid invaluable groundwork for future studies of the many previously unexamined or underexamined texts covered in The Christian Jew and the Unmarked Jewess."—The Medieval Review

"Adrienne Williams Boyarin has written a remarkable exploration of a strain of Jewish-Christian relations often overlooked in scholarship: the instrumental usefulness of seeing Christians and Jews in English writing and history not as different but as the same. Those familiar with psychoanalytic theory may recall the old Lacanian dictum that identity is forged, not only against the Other, but also in (the) terms of the Other. Exercising this logic, Williams Boyarin teases out the implications of 'polemical sameness' between Self and Other, Christian and Jew, and, in the process, makes an important contribution to the large and expanding field of studies on Jewish-Christian relations in medieval England."—Geraldine Heng, author of The Invention of Race in the European Middle Ages