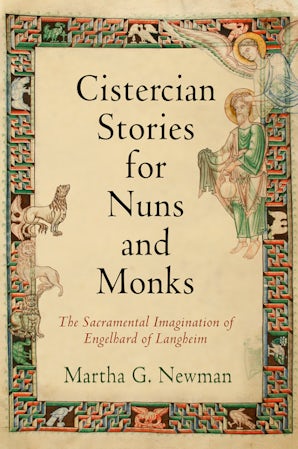 Cistercian Stories for Nuns and Monks

The Sacramental Imagination of Engelhard of Langheim

Around the year 1200, the Cistercian Engelhard of Langheim dedicated a collection of monastic stories to a community of religious women. Martha G. Newman explores how this largely unedited collection of tales about Cistercian monks illuminates the religiosity of Cistercian nuns. As did other Cistercian storytellers, Engelhard recorded the miracles and visions of the order's illustrious figures, but he wrote from Franconia, in modern Germany, rather than the Cistercian heartland. His extant texts reflect his interactions with non-Cistercian monasteries and with Langheim's patrons rather than celebrating Bernard of Clairvaux. Engelhard was conservative, interested in maintaining traditional Cistercian patterns of thought. Nonetheless, by offering to women a collection of narratives that explore the oral qualities of texts, the nature of sight, and the efficacy of sacraments, Engelhard articulated a distinctive response to the social and intellectual changes of his period.

In analyzing Engelhard's stories, Newman uncovers an understudied monastic culture that resisted the growing emphasis on the priestly administration of the sacraments and the hardening of gender distinctions. Engelhard assumed that monks and nuns shared similar interests and concerns, and he addressed his audiences as if they occupied a space neither fully sacerdotal nor completely lay, neither scholastic nor unlearned, and neither solely male nor only female. His exemplary narratives depict the sacramental value of everyday objects and behaviors whose efficacy relied more on individual spiritual formation than on sacerdotal action. By encouraging nuns and monks to imagine connections between heaven and earth, Engelhard taught faith as a learned disposition. Newman's study demonstrates that scholastic questions about signs, sacraments, and sight emerged in a narrative form within late twelfth-century monastic communities.

"Cistercian Stories is a must-read for medieval monastic historians, theologians, and scholars of religion…By analyzing the late twelfth-century story collection and other extant writings of Engelhard, a relatively unknown monk at the Cistercian monastery of Langheim in southeastern Germany, Newman offers fresh insights into how members of this monastic order exemplified their religio to form true and lasting fides through the stories they told, composed, circulated, and read."—The Medieval Review

"In this ground-breaking, thoughtful, and imaginative study, Martha G. Newman examines a book of exemplary stories composed in the late twelfth century by the Cistercian monk Engelhard of Langheim abbey in Franconia (as well as Engelhard's other compositions—his Vita Mathildis about the Augustinian canoness Mechthild of Diessen; letters; and a newly discovered devotional work on the Virgin Mary). While focusing mostly on Engelhard's book of exempla, Newman also studies Engelhard's other writings, identifying consistent themes throughout his œuvre."—Sehepunkte

"In Cistercian Stories for Nuns and Monks, Martha G. Newman places the monk, author, and sometime abbot Engelhard of Langheim in the social, spiritual, and intellectual milieu of late twelfth-century monastic life. Her important and fascinating book enriches our understanding of a period of tremendous change as universities displaced monasteries as centers of learning, the Mass displaced prayer as a core spiritual experience, and monasticism seemingly gave way to new forms of religious life and devotion."—Fiona Griffiths, Stanford University