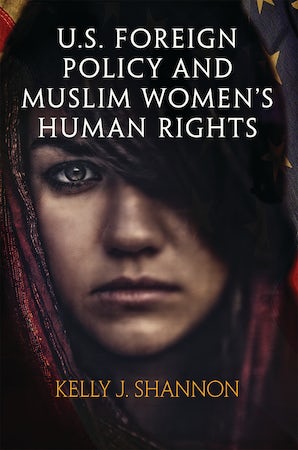 A fresh interpretation of U.S. relations with the Muslim world since 1979

Americans' concerns about women's human rights in Muslim countries were triggered by the Iranian Revolution of 1979 and have evolved within the context of long-standing Western stereotypes about Muslims, as well as transnational feminism and the global human rights movement. As these frameworks simultaneously competed against and reinforced one another, U.S. public conversations about Muslim women intensified, culminating in feminist campaigns and U.S. policies that aimed to defend women's rights in Islamic countries—such was the case with the Clinton administration's decision not to recognize the Taliban regime after they seized control of Afghanistan in 1996.

U.S. Foreign Policy and Muslim Women's Human Rights provides a fresh interpretation of U.S. relations with the Muslim world and, more broadly, U.S. foreign relations history and the history of human rights. Kelly J. Shannon argues that, as U.S. attention to the Middle East and other Muslim-majority regions became more focused and sustained, the issue of women's human rights in Islamic societies was one that Americans gradually identified as vitally important to U.S. foreign policy. Based on an analysis of a wide range of sources—including U.S. government and United Nations documents, oral histories, NGO archival records, news media, scholarship, films and television, and novels—and a wide range of actors including journalists, academics, activists, NGOs, the public, Muslim women, Islamic fundamentalists, and U.S. policymakers—the book challenges traditional interpretations of U.S. foreign policy that assert the primacy of "hard power" concerns in U.S. decision making. By reframing U.S.-Islamic relations with respect to women's rights, and revealing faulty assumptions about the drivers of U.S. foreign policy, Shannon sheds new light on U.S. identity and policy creation and alters the standard narratives of the U.S. relationship with the Muslim world in the closing years of the Cold War and the emergence of the post-Cold War era.

"U.S. Foreign Policy and Muslim Women's Human Rights is a timely addition to the corpus of texts on US foreign policy, human rights, and US relations with Muslim states. In the current political climate of fading human rights commitments and the rhetoric that emboldens anti-Muslim practices, the book offers a powerful reminder of the role of human rights in the US national identity and lessons that can be used for charting its way forward."—H-Diplo

"This book is excellent: cautious but cogent in its arguments, comprehensive in its research, and balanced, but not bland, in its conclusions. Kelly Shannon demonstrates that issues of women and gender have infiltrated U.S. policymaking circles concerned with the Muslim Middle East since 1979, and, while she is not the first to suggest this, she is emphatically the first to trace these issues systematically through recent history and to elucidate them so fully."—Andrew J. Rotter, Colgate University

"This important and persuasively argued book challenges much recent literature on the United States and the Middle East to reveal how women's rights emerged as an important lens for imagining the Islamic world. While some policymakers have cynically sought to justify intervening in the Middle East in the name of women, Shannon shows how activists both at home and abroad sought to reshape conceptions of U.S. National Security to place women at the center, sometimes challenging U.S. empire in the process."—Brad Simpson, University of Connecticut