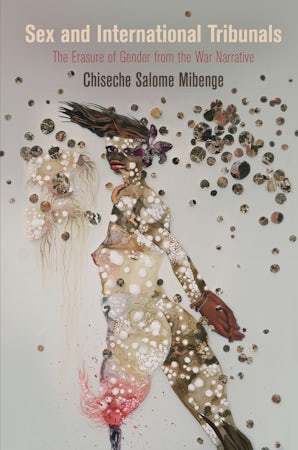 The Erasure of Gender from the War Narrative

Before the twenty-first century, there was little legal precedent for the prosecution of sexual violence as a war crime. Now, international tribunals have the potential to help make sense of political violence against both men and women; they have the power to uphold victims' claims and to convict the leaders and choreographers of systematic atrocity. However, by privileging certain accounts of violence over others, tribunals more often confirm outmoded gender norms, consigning women to permanent rape victim status.

In Sex and International Tribunals, Chiseche Salome Mibenge identifies the cultural assumptions behind the legal profession's claims to impartiality and universality. Focusing on the postwar tribunals in Rwanda and Sierra Leone, Mibenge mines the transcripts of local and supranational criminal trials and truth and reconciliation commissions in order to identify and closely examine legal definitions of forced marriage, sexual enslavement, and the conscription of children that overlook the gendered experiences of armed conflict beyond the mass rape of women and girls. In many cases, a single rape conviction constitutes sufficient proof that gender-based violence has been mainstreamed into the prosecution of war crimes. Drawing on anthropological research in African conflicts, and feminist theory, Mibenge challenges legal narratives that reinscribe essentialized notions of gender in the conduct and resolution of violent conflict and uncovers the suppressed testimonies of men and women who are unwilling or unable to recite the legal scripts that would elevate them to the status of victimhood recognized by an international and humanitarian audience.

At a moment when international intervention in conflicts is increasingly an option, Sex and International Tribunals points the way to a more nuanced and just response from courts.

"In a book that ranges from poignantly personal to deeply ethnographic but is across-the-board strikingly original, Mibenge challenges the legalization of gender essentialism and the gender nature of (sexual violence in) conflict. Using original research from Rwanda and Sierra Leone alongside in-depth legal analysis, the author compellingly makes the argument that the very norms and laws that appear to protect victims of sexual violence actually regulate and silence the very people they are meant to attract."—Choice

"Sex and International Tribunals interrogates the unstated cultural assumptions behind the legal profession's claims to impartiality and universality. At a moment when international interventions in societies in crisis have never been more visible, this powerful and in-depth analysis is sorely needed."—Mary Moran, Colgate University