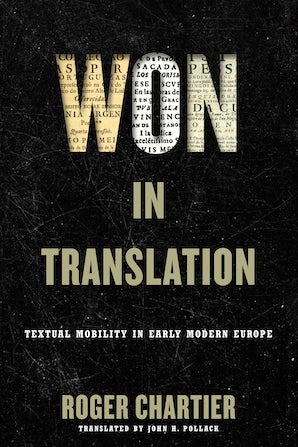 In Won in Translation Roger Chartier, one of the world's leading historians of books, publishing, and reading, considers the mobility of the early modern text and the plurality of circulating versions of the same work. The agent for both is translation, for through their lexical, aesthetic, and cultural decisions, translators always assign new meaning or new status to what they translate.

Won in Translation proceeds by way of four case studies, three dedicated to works originally in Spanish, the fourth to a Portuguese dramatic adaptation of Don Quixote. Bartolomé de Las Casas' Brevísima relación de la destrucción de las Indias, first printed in 1552, was a powerful instrument for the construction of what was later called the "black legend" of Spanish monarchy. Baltasar Gracián's Oráculo Manual, published in 1647, became the most famous courtier's manual in Europe. Both traveled more widely and were translated more often than any other books of their era. For Chartier they illustrate the great power of translation, which allowed Las Casas' account to be placed in multiple and successive contexts and enabled Gracián's book to take on a range of meanings it had not originally had. Chartier's next two chapters are devoted to plays, one by Lope de Vega, the other by Antônio José da Silva. In the case of Lope's Fuente Ovejuna, the "translation" was one from historical chronicle to dramatic performance. In Antônio José da Silva's Vida do Grande D. Quixote, the textual migration is twofold, as Cervantes' hero moves from Spanish to Portuguese and from novel to play.

In an Epilogue, Chartier moves three centuries forward to consider the paradox that it is the absolute immobility of the text, "reinvented" word for word, that creates its mobility in Jorge Luis Borges' fiction "Pierre Menard, Author of the Quixote." Works are transformed through changes of genre or language, to be sure; but even when the texts remain fixed, their readers give them different or inverted meaning.