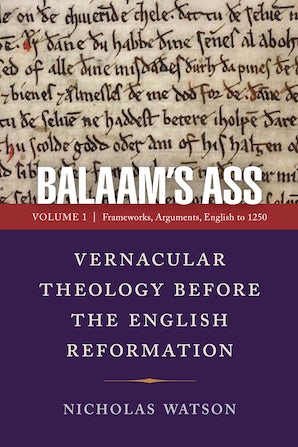 For over seven hundred years, bodies of writing in vernacular languages served an indispensable role in the religious and intellectual culture of medieval Christian England, yet the character and extent of their importance have been insufficiently recognized. A longstanding identification of medieval western European Christianity with the Latin language and a lack of awareness about the sheer variety and quantity of vernacular religious writing from the English Middle Ages have hampered our understanding of the period, exercising a tenacious hold on much scholarship.

Bringing together work across a range of disciplines, including literary study, Christian theology, social history, and the history of institutions, Balaam's Ass attempts the first comprehensive overview of religious writing in early England's three most important vernacular languages, Old English, Insular French, and Middle English, between the ninth and sixteenth centuries. Nicholas Watson argues not only that these texts comprise the oldest continuous tradition of European vernacular writing, but that they are essential to our understanding of how Christianity shaped and informed the lives of individuals, communities, and polities in the Middle Ages.

This first of three volumes lays out the long post-Reformation history of the false claim that the medieval Catholic Church was hostile to the vernacular. It analyzes the complicated idea of the vernacular, a medieval innovation instantiated in a huge body of surviving vernacular religious texts. Finally, it focuses on the first, long generation of these writings, in Old English and early Middle English.

"As this important volume shows, the story of English literature cannot be told without the history of its vernacular theology. Scholars of English literature, as well as scholars of Christian history, will benefit from the capaciousness of this volume’s learning and the clarity of its insight as it cuts confidently across disciplinary boundaries of period, place, and language. Watson makes clear that his focus on the vernacular, and specifically on vernacular theology, disrupts a tradition of nation-based literary history, and the nationalist and imperialist ideologies that shaped and have been shaped by that history."—Modern Philology

"Watson brilliantly traces what he calls the ‘dynamic opposition’ between theology in the vernacular in Britain and the development of its literatures, showing that neither history can be written without the other. With an immense learning (lightly worn) Watson presents us, for the first time, with the whole archive of vernacular religious writing—at one point imagining it physically as a sequel to Migne’s Patrologia Latina—drawing out the concepts and historical connections that make it such necessary reading. This volume and the two further volumes that will follow it restore our rich religious literature to its rightful place at the center of the history of all literature in English."—Christopher Cannon, Johns Hopkins University

"Polemical yet irenic, madly ambitious yet carefully delimited, passionately committed to its arguments yet always willing to weigh objections, up-to-the minute, yet rooted in an extremely longue durée, Balaam’s Ass is, in every sense, magisterial."—Barbara Newman, Northwestern University