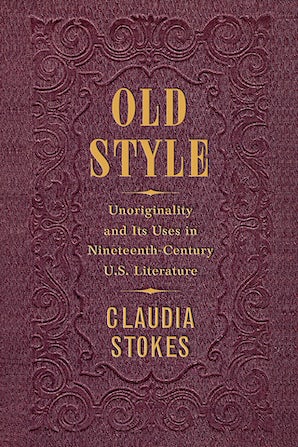 Unoriginality and Its Uses in Nineteenth-Century U.S. Literature

An aesthetic of unoriginality shaped literary style and reader taste for decades of the nineteenth century. While critics in the twentieth century and beyond have upheld originality and innovation as essential characteristics of literary achievement, they were not features particularly prized by earlier American audiences, Claudia Stokes contends. On the contrary, readers were taught to value familiarity, traditionalism, and regularity. Literary originality was often seen as a mark of vulgar sensationalism and poor quality.

In Old Style Stokes offers the first dedicated study of a forgotten nineteenth-century aesthetic, explicating the forms, practices, conventions, and uses of unoriginality. She focuses in particular on the second quarter of the century, when improvements in printing and distribution caused literary markets to become flooded with new material, and longstanding reading practices came under threat. As readers began to prefer novelty to traditional forms, advocates openly extolled unoriginality in an effort to preserve the old literary ways. Old Style examines this era of significant literary change, during which a once-dominant aesthetic started to give way to modern preferences.

If writing in the old style came to be associated with elite conservatism—a linkage that contributed to its decline in the twentieth century—it also, paradoxically provided marginalized writers—people of color, white women, and members of the working class—the literary credentials they needed to enter print. Writing in the old style could affirm an aspiring author's training, command of convention, and respectability. In dismissing unoriginality as the literary purview of the untalented or unambitious, Stokes cautions, we risk overlooking something of vital importance to generations of American writers and readers.

Part I. Unoriginality on the Margins
Chapter 1. The Poetics of Unoriginality: The Case of Lucretia Davidson
Chapter 2. Novel Commonplaces: Quotation, Epigraphs, and Literary Authority
Chapter 3. A Few Good Books: Rereading and the Virtues of Familiarity

Part II. Elitist Conservatism and the Defense of Tradition
Chapter 4. Old Friends in New Dress: James Fenimore Cooper and the Politics of the Sequel
Chapter 5. Longfellow's Antiquarianism
Chapter 6. Thomas Bailey Aldrich and the End of Tradition

"Claudia Stokes’s admirable Old Style possesses a number of what could be called old fashioned virtues: it is very well-written, impressively researched, and surprisingly generous to a number of largely forgotten or dismissed literary figures. The argument of Old Style, however, is nothing if not timely. Stokes makes a persuasive case for the need to reevaluate our belief in the value of originality....Old Style is imaginative, original, and unconventional."—Modern Philology

"Claudia Stokes returns us to a moment when the derivative was not so easily dismissible-when imitation, iteration, and quotation held real cultural cachet. Considering writers both forgotten and familiar, she unfolds an utterly convincing case for the power of the unoriginal in the service of both progressive and conservative causes in the early United States. In so doing, she offers a beautifully researched, impeccably written, and manifestly important corrective to a whole raft of stories that we keep telling about the exceptionality of America and its artists."—William Huntting Howell, Boston University