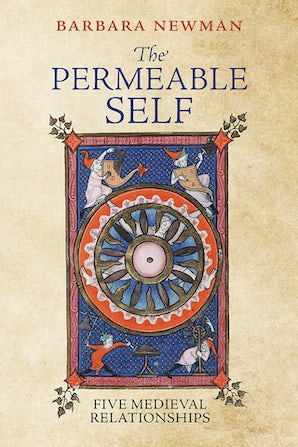 How, Barbara Newman asks, did the myth of the separable heart take such a firm hold in the Middle Ages, from lovers exchanging hearts with one another to mystics exchanging hearts with Jesus? What special traits gave both saints and demoniacs their ability to read minds? Why were mothers who died in childbirth buried in unconsecrated ground? Each of these phenomena, as diverse as they are, offers evidence for a distinctive medieval idea of the person in sharp contrast to that of the modern "subject" of "individual."

Starting from the premise that the medieval self was more permeable than its modern counterpart, Newman explores the ways in which the self's porous boundaries admitted openness to penetration by divine and demonic spirits and even by other human beings. She takes up the idea of "coinherence," a state familiarly expressed in the amorous and devotional formula "I in you and you in me," to consider the theory and practice of exchanging the self with others in five relational contexts of increasing intimacy. Moving from the outside in, her chapters deal with charismatic teachers and their students, mind-reading saints and their penitents, lovers trading hearts, pregnant mothers who metaphorically and literally carry their children within, and women and men in the throes of demonic obsession. In a provocative conclusion, she sketches some of the far-reaching consequences of this type of personhood by drawing on comparative work in cultural history, literary criticism, anthropology, psychology, and ethics.

The Permeable Self offers medievalists new insight into the appeal and dangers of the erotics of pedagogy; the remarkable influence of courtly romance conventions on hagiography and mysticism; and the unexpected ways that pregnancy—often devalued in mothers—could be positively ascribed to men, virgins, and God. The half-forgotten but vital idea of coinherence is of relevance far beyond medieval studies, however, as Newman shows how it reverberates in such puzzling phenomena as telepathy, the experience of heart transplant recipients who develop relationships with their deceased donors, the phenomenon of psychoanalytic transference, even the continuities between ideas of demonic possession and contemporary understandings of obsessive-compulsive disorder.

In The Permeable Self Barbara Newman once again confirms her status as one of our most brilliant and thought-provoking interpreters of the Middle Ages.

"This thorough work will be indispensable to those interested in the complexities of the interpersonal in the medieval period, and how the foundations and lexicon of Christian theology influenced the ways in which individuals thought of themselves and their connections to others. Newman’s readings of those connections are fascinating and thought-provoking, not least because they hint at the ways we are all still vulnerable to one another; there is a familiarity pulsing beneath all of that alterity...Newman’s pedagogical gift is in presenting all of those seemingly strange medieval relationships in such a way that they reach across the centuries into our individual bodies and minds, tuning them to the frequency of their own peculiar connections."—Times Literary Supplement

"In The Permeable Self, Barbara Newman not only offers insightful readings of a different theory of mind than one we know today, but also provides an inspiring way to think about the meaningful contributions that academic work in the humanities can offer...Her exploration of how medieval Western culture initially imagined and informed itself through a very different theory of mind, accompanied by frequent references to contemporary echoes of this powerful tradition, invites readers to become reacquainted with a way of living in the world that offers different kinds of valuable possibilities than our cultural training constrains us to expect."—Literature and Theology

"Essential...In keen and insightful close readings, [Newman] makes a compelling case for the importance, to the medieval self, of the concept of coinherence, of 'being-within-one-another'...Newman weaves together a wealth of research from literature, letters, folklore, and historical documents, meticulously contextualizing each relationship. The discussion of ways in which variations of coinherence intersect in saints lives is particularly rich and an exciting contribution to the study of hagiography....For researchers of medieval studies, this is required reading, but there is much here for anyone studying ideas of self and personhood."—Choice

"Barbara Newman's The Permeable Self takes readers on a journey that explores the inner workings of extremely complex human and symbolic relationships. Centered on the concepts of coinherence and indwelling, her book ranges widely from topics like saintly telepathy, the exchange of hearts, and childbirth to the demonic invasion of human bodies. The common thread is humans' permeability, their openness to both good and evil others. In clear, accessible, and often witty prose, Newman provides extraordinary insights into the medieval psyche."—Renate Blumenfeld-Kosinski, author of The Strange Case of Ermine de Reims: A Medieval Woman Between Demons and Saints

"Charles Taylor has contrasted the 'buffered self' of a secular age to the 'porous self' of other ages. In <i>The Permeable Self</i> Barbara Newman fleshes out medieval understandings of porous personhood in fascinating detail, supplementing, but also correcting, Taylor's influential account. Her many insights about medieval personhood have profound relevance to debates about the intersubjectivity of modern liberalism and postmodernism's liquid selves."—Ryan McDermott, University of Pittsburgh

"<i>The Permeable Self</i> is a brilliant exploration of medieval ways of imagining mind and body. Teaching, love, pregnancy, and mental illness look startlingly different when people take for granted that thoughts can enter other bodies directly. That in turn should push readers to ask how modern assumptions shape modern experience in ways so fundamental we may not notice them. One of the most fascinating books I have read this year."—T. M. Luhrmann, author of How God Becomes Real: Kindling the Presence of Invisible Others