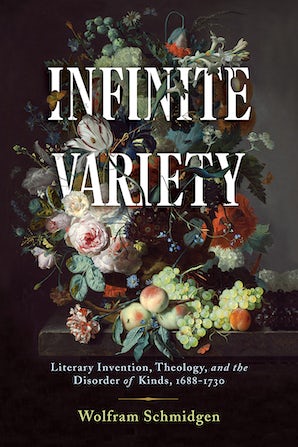 Unnerved by the upheavals of the seventeenth century, English writers including Thomas Hobbes, Richard Blackmore, John Locke, Jonathan Swift, and Daniel Defoe came to accept that disorder, rather than order, was the natural state of things. They were drawn to voluntarism, a theology that emphasized a willful creator and denied that nature embodied truth and beauty. Voluntarism, Wolfram Schmidgen contends, provided both theological framework and aesthetic license. In Infinite Variety, he reconstructs this voluntarist tradition of literary invention.

Once one accepted that creation was willful and order arbitrary, Schmidgen argues, existing hierarchies of kind lost their normative value. Literary invention could be radicalized as a result. Acknowledging that the will drives creation, such writers as Blackmore and Locke inverted the rules of composition and let energy dominate structure, matter create form, and parts be valued over the whole. In literary, religious, and philosophical works, voluntarism authorized the move beyond the natural toward the deformed, the infinite, and the counterfactual.

In reclaiming ontology as an explanatory context for literary invention, Infinite Variety offers a brilliantly learned analysis of an aesthetic framed not by the rise of secularism, but by its opposite. It is a book that articulates how religious belief shaped modern literary practices, including novelistic realism, and one that will be of interest to anyone who thinks seriously about the relationship between literature, religion, and philosophy.

Introduction
Chapter 1. Toward a Voluntarist Aesthetic
Chapter 2. Glorious Arbitrariness: Science, Religion, and the Imagination of Infinite Variety
Chapter 3. Energy and Structure: Remaking the Given in Blackmore and Pope
Chapter 4. Embarrassed Invention: Stillingfleet, Locke, and the Style of Voluntarism
Chapter 5. The Constructive Swift: Between the Hope and Fear of Decomposition
Chapter 6. The Providence of Gathering and Scattering: Dynamic Variety in Defoe
Conclusion
Notes
Index
Acknowledgments

"This book is a striking achievement, confident in its abstractions and their utility in illuminating a shared intellectual and aesthetic preoccupation."—Modern Philology

"Part of the recent movement in eighteenth-century studies to resist the teleological secularization narrative that has governed much of the literary and cultural criticism in the field, Infinite Variety is also one of the most stimulating, original, and erudite books I've read in some time. Wolfram Schmidgen makes a cogent, compelling, and historically grounded case for the imaginative power of literature at a moment of epistemological crisis."—Helen Deutsch, University of California Los Angeles

"In Infinite Variety, Wolfram Schmidgen offers a fresh perspective on literary invention in late seventeenth- and early eighteenth-century England...[T]he perspective of this book is generous and valuable and...readers of all persuasions interested in the early modern history of literature, culture and ideas will be thankful to it for its fertile insights and provocations."—The Seventeenth Century