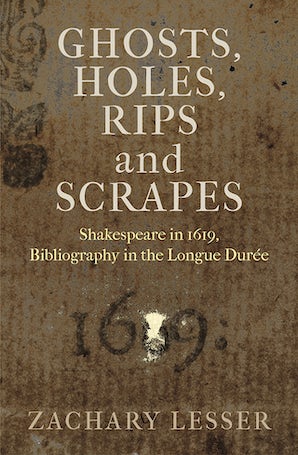 Shakespeare in 1619, Bibliography in the Longue Durée

Four years before the publication of the First Folio, a group of London printers and booksellers attempted to produce a "collected works" of William Shakespeare, not in an imposingly large format but as a series of more humble quarto pamphlets. For mysterious reasons, perhaps involving Shakespeare's playing company, the King's Men, the project ran into trouble. In an attempt to salvage it, information on the title pages of some of the playbooks was falsified, making them resemble leftover copies of earlier editions. The deception worked for nearly three hundred years, until it was unmasked by scholars in the early twentieth century. The discovery of these "Pavier Quartos," as they became known, was a landmark success for the New Bibliography and played an important role in establishing the validity and authority of that method of analysis. While more recent scholars have reassessed the traditional narrative that the New Bibliographers wrote, no one has gone back to look at the primary evidence: the quartos themselves.

In Ghosts, Holes, Rips and Scrapes Zachary Lesser undertakes a completely fresh study of these playbooks. Through an intensive bibliographical analysis of over three hundred surviving quartos, Lesser reveals evidence that has gone entirely unseen before: "ghosts" (faint, oily impressions produced when one book is bound next to another); "holes" (the tiny remains of the first simple stitching that held pamphlets together); and "rips and scrapes" (post-production alterations of title pages). This new evidence—much of it visible only with the aid of enhanced photographic methods—suggests that the "Pavier Quartos" are far more mysterious, with far more consequential ramifications for book history and Shakespeare scholarship than we have thought.

Zachary Lesser makes a significant contribution to various fields such as Shakespeare, bibliography, and the history of the book...Lesser’s volume is focused, a book about a book, 'an extended case study, with I hope broad implications, of one of the most important books in the history of Shakespeare studies.' For Lesser, the history of the Pavier Quartos can tell us a great deal and in ways that are not always readily apparent...Lesser asks us to look closely again at the evidence embedded in 'centuries of accreted history' and does so with great success.

"This book is a perfect illustration of what Lesser sees as the humanism of historically informed bibliography. Lesser’s book is also a compelling counter to the now prevalent idea that the reproduction of early modern books online, from the almost comprehensive Early English Books Online (EEBO) series through to the growing number of scans of Shakespeare quartos and folios, will circumvent the need to examine multiple individual copies of these books. The kind of close look required for this type of study necessitates the individual examination of dozens, if not hundreds, of examples, though this is also an enterprise requiring collaboration with rare book librarians and archivists. Ghosts, Holes, Rips and Scrapes is a model for this increasingly important work; it is a pleasure to read, and the appropriately high production values for the book, which is copiously illustrated in colour, enhance that pleasure."—Parergon

"This is a magnificent contribution to bibliography that will be read enthusiastically by Shakespeare scholars and anyone working in the field of the history of the book, textual editing, and bibliography at the highest level. Zachary Lesser elegantly conveys the implications of his rigorous archival research, and the impression is-quite thrillingly-of a scholar rewriting in significant ways the history of a book that we thought we knew."—Adam Smyth, Balliol College, Oxford University