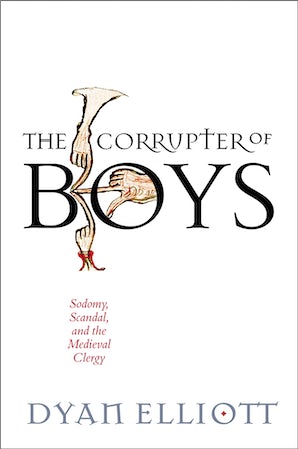 The Corrupter of Boys

Sodomy, Scandal, and the Medieval Clergy

In the fourth century, clerics began to distinguish themselves from members of the laity by virtue of their augmented claims to holiness. Because clerical celibacy was key to this distinction, religious authorities of all stripes—patristic authors, popes, theologians, canonists, monastic founders, and commentators—became progressively sensitive to sexual scandals that involved the clergy and developed sophisticated tactics for concealing or dispelling embarrassing lapses. According to Dyan Elliott, the fear of scandal dictated certain lines of action and inaction, the consequences of which are painfully apparent today. In The Corrupter of Boys, she demonstrates how, in conjunction with the requirement of clerical celibacy, scandal-averse policies at every conceivable level of the ecclesiastical hierarchy have enabled the widespread sexual abuse of boys and male adolescents within the Church.

Elliott examines more than a millennium's worth of doctrine and practice to uncover the origins of a culture of secrecy and concealment of sin. She charts the continuities and changes, from late antiquity into the high Middle Ages, in the use of boys as sexual objects before focusing on four specific milieus in which boys and adolescents would have been especially at risk in the high and later Middle Ages: the monastery, the choir, the schools, and the episcopal court.

The Corrupter of Boys is a work of stunning breadth and discomforting resonance, as Elliott concludes that the same clerical prerogatives and privileges that were formulated in late antiquity and the medieval era—and the same strategies to cover up the abuses they enable—remain very much in place.

Part I
Chapter 1. The Scandal of Clerical Sin
Chapter 2. The Trouble with Boys
Chapter 3. The Problem with Women
Chapter 4. Sodomy on the Cusp of the Eleventh and Twelfth Centuries
Chapter 5. Confession, Scandal, and the "Sin Not Fit to be Named"

"In my work as a court expert and consultant worldwide, I have been involved in more than one discussion with Church apologists who assert that the sexual violation of boys is a new phenomenon. Among the greatest failures of the hierarchical leadership of the Catholic Church has been the abysmal ignorance of the Church's own unrevised history, the unwillingness to entertain the validity of the events of the past when they are presented, and the inability to learn from that past. In The Corrupter of Boys Dyan Elliott shows us the evident parallels between the medieval and modern periods. It is a remarkable and invaluable book."—Thomas P. Doyle, J.C.D., C.A.D.C.

"This is an exceptionally important and deeply disturbing book, which addresses the evidence of extensive, and largely tolerated, sexual predation involving young boys throughout the Middle Ages, and calls out the ongoing legacy of that practice, along with the arguments deployed by clerics to conceal it...Elliott deserves warm congratulations for what she has achieved. Her argument is intellectually convincing and ethically robust."—Medium Aevum

"Dyan Elliott’s most recent book is a game changer. In it, she overturns a forty-year-old pattern of writing about medieval sodomy as queer liberation with a new narrative that focuses on coercion, violence, and silence, and above all on the breach of clerical celibacy and the corruption of minors in stories of same-sex sexuality involving clerics and monks. The book is also an indictment of Catholic clergymen and the clerical hierarchy of our own day for the continued adherence to attitudes and practices begun centuries ago, and she defends the right and responsibility of historians to comment meaningfully on the present. Finally, the book is also an implicit criticism of modern historians of homosexuality, who have ignored the abuses of power in our sources for a fiction about individual autonomy amid social oppression…[Elliott] is giving us a new paradigm with which to understand medieval sexuality and its fraught relationship with religion."—The Medieval Review

"Elliott’s meticulous study is the product of her longstanding research on medieval clerical culture, but also adds new areas of research to her previous contributions on gender and cultural history. The book’s taut construction and readability makes it informative for the medievalist but still an accessible, engaging resource for non-specialists seeking to understand the history behind the current scandals in the Catholic Church."—Mediaevistik

"This is a powerful and important book. Dyan Elliott’s central thesis is that the scandals that have rocked the Catholic Church in recent decades concerning the sexual abuse of children have their roots in the Middle Ages...Viewed through the lens of this penetrating book, a picture...in which the concealment or obfuscation of predatory behavior by the clerical establishment casts a dark and enduring shadow."—The Journal of Religion

"When the contemporary Catholic clergy sexual abuse crisis first broke in the 1980s, church officials in the United States and Rome pointed to the immorality of secular modernity as its cause. The Corrupter of Boys exposes once and for all the moral and intellectual emptiness of this claim. Elliott's deeply learned and unflinching account of the sexual privileges accorded priests and prelates from antiquity through the later middle ages-enshrined in theology and law and protected by secrets, silence, and lies-is an essential contribution towards a new history of Catholic sexuality. It is also a major step in the dismantling of the Catholic closet."—Robert A. Orsi, author of History and Presence

"Dyan Elliott, an indefatigable medievalist-muckraker, argues that clerical child abuse is not just a modern issue. Here laid bare is the longue durée of an ecclesiastical culture anxious above all to preserve its power and reputation, rather than to confront its moral failings. Elliott's fearless take on the clergy's romance with pedophilia is certain to inspire both passionate controversy and exciting new research."—Barbara H. Rosenwein, Loyola University Chicago

"Dyan Elliott's bold book is unflinching in its examination of the long history of clerical pederasty and the ecclesiastical culture of silence about sexual predators. Her argument will provoke important reconsiderations of the history of sexualities, of medieval anti-clericalism, and of conceptions of childhood."—Martha Newman, University of Texas at Austin