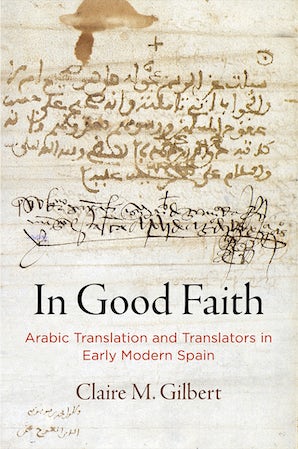 The century that followed the fall of Granada at the end of 1491 and the subsequent consolidation of Christian power over the Iberian Peninsula was marked by the introduction of anti-Arabic legislation and the development of hostile cultural norms affecting Arabic speakers. Yet as Spanish institutions of power first restricted and then eliminated Arabic language use, marginalizing Arabic-speaking communities, officially sanctioned translation to and from Arabic played an increasingly crucial role in brokering the administration of the growing Spanish empire and its overseas territories. The move on the peninsula from a regime of legal pluralism to one of religious and legal orthodoxy created new needs and institutions for Arabic translation, which simultaneously reflected, subverted, and ultimately reaffirmed the normative anti-Arabic language politics.

In Good Faith examines the administrative functions and practices of the individual translators who walked the knife's edge, as the task of the Arabic-Spanish translator became both more perilous and more coveted during a volatile historical period. Despite the myriad personal and political risks run by Arabic speakers, Claire M. Gilbert argues that Arabic translation was at the core of early modern Spanish culture and society and that translators played pivotal roles in the administrative, institutional, and ideological development of Spain and its relationships, both domestic and international. Using materials from state, local, and religious archives, Gilbert develops the notion of "fiduciary translation" and uses it to paint a vivid picture of the techniques by which translators attempted to demonstrate their expertise and trustworthiness—thereby to help protect themselves, their families, and even their communities from the Inquisition and other authorities. By emphasizing the practices and networks of the individual translators themselves, Gilbert's social history of Arabic translation deepens our understanding of religious minorities, international relations, and statecraft in early modern Spain.

"“[A]s Claire Gilbert shows in this rich book, both Arabic and its translators were foundational for the Spanish State, with a continuing—although evolving—role in the development of legal, political, diplomatic and historical thought…Gilbert comprehensively argues that, although its meanings shifted significantly between the fifteenth and eighteenth centuries, Arabic never lost its vital role in the political, cultural, and legal construction of early modern Spain and its position within the world."—Bulletin of Spanish Studies

"In Good Faith makes important arguments regarding the role of Arabic to Spanish and Spanish to Arabic translation in early modern Iberian governance. Claire M. Gilbert's accounts of translators and their networks, dynasties, and struggles to create and preserve authority are fascinating; the exploration, throughout, of the paradoxes of translation is excellent; and the archival research is impressive."—Thomas Burman, University of Notre Dame