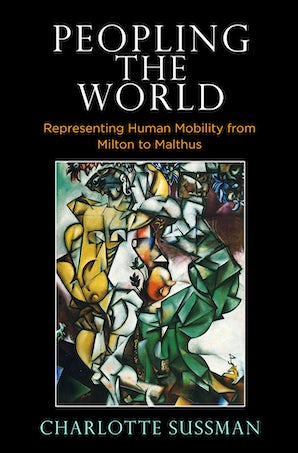 In John Milton's Paradise Lost of 1667, Adam and Eve are promised they will produce a "race to fill the world," a thought that consoles them even after the trauma of the fall. By 1798, the idea that the world would one day be entirely filled by people had become, in Thomas Malthus's hands, a nightmarish vision. In Peopling the World, Charlotte Sussman asks how and why this shift took place. How did Britain's understanding of the value of reproduction, the vacancy of the planet, and the necessity of moving people around to fill its empty spaces change? Sussman addresses these questions through readings of texts by Malthus, Milton, Swift, Defoe, Goldsmith, Sir Walter Scott, Mary Shelley, and others, and by placing these authors in the context of debates about scientific innovation, emigration, cultural memory, and colonial settlement.

Sussman argues that a shift in thinking about population and mobility occurred in the third quarter of the eighteenth century. Before that point, both political and literary texts were preoccupied with "useless" populations that could be made useful by being dispersed over Britain's domestic and colonial territories; after 1760, a concern with the depopulation caused by emigration began to take hold. She explains this change in terms of the interrelated developments of a labor theory of value, a new idea of national identity after the collapse of Britain's American empire, and a move from thinking of reproduction as a national resource to thinking of it as an individual choice. She places Malthus at the end of this history because he so decisively moved thinking about population away from a worldview in which there was always more space to be filled and toward the temporal inevitability of the whole world filling up with people.

Introduction
Chapter 1. A Race to Fill the Earth: Mobility and Fecundity in Paradise Lost
Chapter 2. The Afterlives of Political Arithmetic in Defoe and Swift
Chapter 3. The Veteran's Tale: War, Mobile Populations, and National Identity
Chapter 4. Remembering the Population: Goldsmith and Migration
Chapter 5. The Emptiness at The Heart of Midlothian: Nation, Narration, and Population
Chapter 6. "Islanded in the World": Cultural Memory and Human Mobility in The Last Man
Chapter 7. Prospects of the Future: Malthus, Shelley, and Freedom of Movement
Afterword

If it is already clear that we live in what Thomas Nail terms the century of the migrant, Charlotte Sussman finds in the eighteenth century a crucial prehistory of global displacement. Peopling the World examines the stakes of migration in an era shaped by empire, the transatlantic slave trade, and land enclosure...Meticulously researched and impressive in its historical scope...this book’s capaciousness and its sharp analysis of the ongoing processes of social expulsion that 'peopled the world' make it essential reading both in eighteenth-century studies and in cultural histories of population and migration.

"Peopling the World is a deeply researched and compelling study of views about population and demographic mobility in the British long eighteenth century, and their expression, contestation, and dissemination in literary texts from the period. Charlotte Sussman makes a persuasive case for emigration as a controversial subject which divided writers, thinkers, and politicians, and which underpinned all the major socioeconomic debates of the day, concerning poverty and wealth, nation and empire, place and belonging."—Josephine McDonagh, University of Chicago

"A timely and important intervention into our understanding of how literature helps to shape the movement of population from Milton to Malthus, Peopling the World develops subtle and complicated ideas with clear prose and razor-sharp insight."—Jonathan Sachs, Concordia University