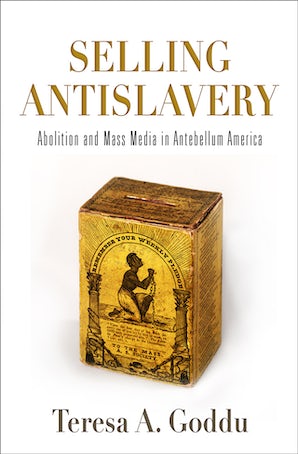 Beginning with its establishment in the early 1830s, the American Anti-Slavery Society (AASS) recognized the need to reach and consolidate a diverse and increasingly segmented audience. To do so, it produced a wide array of print, material, and visual media: almanacs and slave narratives, pincushions and gift books, broadsides and panoramas. Building on the distinctive practices of British antislavery and evangelical reform movements, the AASS utilized innovative business strategies to market its productions and developed a centralized distribution system to circulate them widely. In Selling Antislavery, Teresa A. Goddu shows how the AASS operated at the forefront of a new culture industry and, by framing its media as cultural commodities, made antislavery sentiments an integral part of an emerging middle-class identity. She contends that, although the AASS's dominance waned after 1840 as the organization splintered, it nevertheless created one of the first national mass markets.

Goddu maps this extensive media culture, focusing in particular on the material produced by AASS in the decade of the 1830s. She considers how the dissemination of its texts, objects, and tactics was facilitated by the quasi-corporate and centralized character of the organization during this period and demonstrates how its institutional presence remained important to the progress of the larger movement. Exploring antislavery's vast archive and explicating its messages, she emphasizes both the discursive and material aspects of antislavery's appeal, providing a richly textured history of the movement through its artifacts and the modes of circulation it put into place.

Featuring more than seventy-five illustrations, Selling Antislavery offers a thorough case study of the role of reform movements in the rise of mass media and argues for abolition's central importance to the shaping of antebellum middle-class culture.

Part I. Antislavery Print Culture
Chapter 2. Summing Up Slavery: The Antislavery Almanac and the Production of Fact
Chapter 3. The African American Slave Narrative as Factual Compendium

"Goddu’s bold monograph contributes new interpretive tools to the collective efforts to recover neglected aspects of the African American archive. And it adds its voice to the growing collection of studies prompting us to scrutinize the structures of white abolitionist feeling. Selling Antislavery also sets the scene for further material and visual histories of the antebellum abolitionist movement, and the manifold, complex affective confrontations with slavery that brought the US to Civil War."—American Literary History

Selling Antislavery offers a richly detailed and meticulously researched interrogation of the American Antislavery
Society’s print, visual, and material culture. Goddu’s careful analysis of the ways these objects and texts shaped the tastes, perspective, and identity of those white northerners who would come to define the region’s middle class is especially compelling.

"What makes Selling Antislavery essential reading is the breadth of its research, the depth of its analysis, and the way it demonstrates that 'the movement’s rhetorical approaches were consolidated by its material practices'...Selling Antislavery will interest early Americanists for how it moves from the decades of antislavery activism before the 1830s through the 1860s. It is an important study for anyone interested in the history of media, politics, and culture in the United States."—Early American Literature

"This meticulously researched and crisply argued book manages the interlocking commercial, sentimental, and political formations of 19th-century U.S. print and material cultures with nuance and analytical dexterity...Goddu’s book represents the crucial work that print and material culture studies do. Her readings texture conversations of the literary with material and print cultures’ tangible, quotidian presences...[Selling Antislavery] s a model of how to contextualize whiteness and its various communities and identities and practices, helping us to think about how whiteness as an identity mobilizes racial politics to define itself not just seemingly against Blackness, but also seemingly against racism and anti-Blackness."—Textual Cultures

"Selling Antislavery provides a comprehensive analysis of the fascinating material culture of abolitionism: quirky almanacs, women's Christmas fairs, lavish gift annuals, and grand panoramas of southern slavery and black achievement. It is the book for which slavery studies-and American studies more broadly-has been waiting."—Jeannine DeLombard, author of In the Shadows of the Gallows: Race, Crime, and American Civic Identity

"Through a multimedia array of case studies, Teresa A. Goddu focuses on the business-minded corporatism of the American Anti-Slavery Society. Her book is a much-needed history of the key dynamic that drove the rapid evolution of the antislavery effort in the United States from a small, heterogenous, and unpopular collection of gradualists and radicals into an organized and efficient mass movement."—Marcy Dinius, author of The Camera and the Press: American Visual and Print Culture in the Age of the Daguerreotype