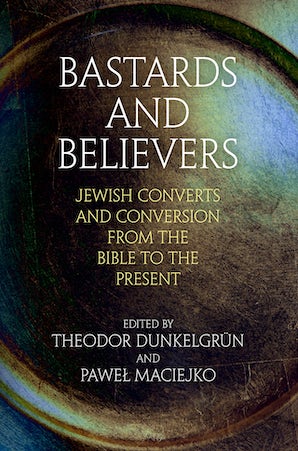 Jewish Converts and Conversion from the Bible to the Present

Theodor Dunkelgrün and Pawel Maciejko observe that the term "conversion" is profoundly polysemous. It can refer to Jews who turn to religions other than Judaism and non-Jews who tie their fates to that of Jewish people. It can be used to talk about Christians becoming Muslim (or vice versa), Christians "born again," or premodern efforts to Christianize (or Islamize) indigenous populations of Asia, Africa, and the Americas. It can even describe how modern, secular people discover spiritual creeds and join religious communities.

Viewing Jewish history from the perspective of conversion across a broad chronological and conceptual frame, Bastards and Believers highlights how the concepts of the convert and of conversion have histories of their own. The volume begins with Sara Japhet's study of conversion in the Hebrew Bible and ends with Netanel Fisher's essay on conversion to Judaism in contemporary Israel. In between, Andrew S. Jacobs writes about the allure of becoming an "other" in late Antiquity; Ephraim Kanarfogel considers Rabbinic attitudes and approaches toward conversion to Judaism in the Middles Ages; and Paola Tartakoff ponders the relationship between conversion and poverty in medieval Iberia. Three case studies, by Javier Castaño, Claude Stuczynski, and Anne Oravetz Albert, focus on different aspects of the experience of Spanish-Portuguese conversos. Michela Andreatta and Sarah Gracombe discuss conversion narratives; and Elliott Horowitz and Ellie Shainker analyze Eastern European converts' encounters with missionaries of different persuasions.

Despite the differences between periods, contexts, and sources, two fundamental and mutually exclusive notions of human life thread the essays together: the conviction that one can choose one's destiny and the conviction that one cannot escapes one's past. The history of converts presented by Bastards and Believers speaks to the possibility, or impossibility, of changing one's life.

"A formidable collection of essays, Bastards and Believers boasts an array of original, instructive, and thoughtful contributions on the subjects of conversion and converts, both actual historical personages and literary constructions, that will render it valuable to numerous scholarly conversations."—Jeremy Cohen, Tel Aviv University