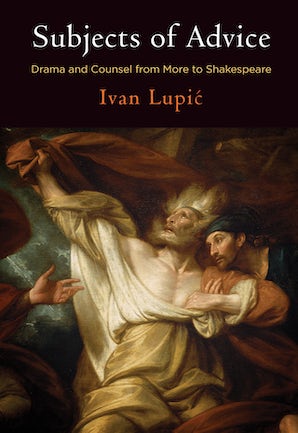 Drama and Counsel from More to Shakespeare

In Subjects of Advice, Ivan Lupić uncovers the rich interconnectedness of dramatic art and the culture of counsel in the early modern period. While counsel was an important form of practical knowledge, with concrete political consequences, it was also an ingrained cultural habit, a feature of obligatory mental, moral, and political hygiene. To be a Renaissance subject, Lupić claims, one had to reckon with the advice of others. Lupić examines this reckoning in a variety of sixteenth-century dramatic contexts. The result is an original account of the foundational role that counsel played in the development of Renaissance drama.

Lupić begins by considering the figure of Thomas More, whose influential argument about counsel as a form of performance in Utopia set the agenda for the entire century. Resisting linear narratives and recovering, instead, the simultaneity of radically different kinds of dramatic experience, he shows the vitality of later dramatic engagements with More's legacy through an analysis of the moral interlude staged within Sir Thomas More, a play possibly coauthored by Shakespeare. More also helps explain the complex use of counsel in Senecan drama, from the neo-Latin plays of George Buchanan, discussed in connection with Buchanan's political writings, to the historical tragedies of the mid-sixteenth century.

If tyranny and exemplarity are the keywords for early Elizabethan drama of counsel, for the plays of Christopher Marlowe it is friendship. Lupić considers Marlowe's interest in friendship and counsel, most notably in Edward II, alongside earlier dramatic treatments, thus exposing the pervasive fantasy of the ideal counselor as another self. Subjects of Advice concludes by placing King Lear in relation to its dramatic sources to demonstrate Shakespeare's deliberate dispersal of counsel throughout his play. Counsel's customary link to plain and fearless speech becomes in Shakespeare's hands a powerful instrument of poetic and dramatic expression.

"As Lupić points out throughout his cogently argued, crisply written, and comprehensively researched book, the shaping and the performance of early modern selfhood depended upon personal and political conditions that the world required of an individual; moreover, identity fashioning seldom took place fully without the benefit of a counsel . . . [T]his engrossing study opens up new critical paths, stretching beyond English drama. This is a book of comparative literary history and historiography; it connects text and theatre within a wide early modern world of cross-linguistic exchange. The critical idiom and methodological approach are unique and refreshing, often polemical and consistently rewarding."—Renaissance and Reformation

"Looking beyond the canonical Renaissance and its texts, Ivan Lupić offers readers a rich and subtle understanding of the nature of counsel in the period, as both a political and a cultural experience. Subjects of Advice is a valuable and welcome addition to the field of early modern studies."—Greg Walker, University of Edinburgh

"Subjects of Advice offers both a genuinely original view of such familiar works as Utopia and King Lear and an importantly recuperative account of works that were significant in their own time, but have been marginalized by literary history, such as Cambyses. It is a fascinating and revelatory book."—Stephen Orgel, Stanford University