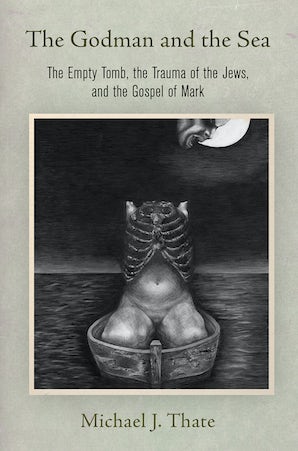 The Godman and the Sea

The Empty Tomb, the Trauma of the Jews, and the Gospel of Mark

If scholars no longer necessarily find the essence and origins of what came to be known as Christianity in the personality of a historical figure known as Jesus of Nazareth, it nevertheless remains the case that the study of early Christianity is dominated by an assumption of the force of Jesus's personality on divergent communities. In The Godman and the Sea, Michael J. Thate shifts the terms of this study by focusing on the Gospel of Mark, which ends when Mary Magdalene, Mary the mother of James, and Salome discover a few days after the crucifixion that Jesus's tomb has been opened but the corpse is not there. Unlike the other gospels, Mark does not include the resurrection, portraying instead loss, puzzlement, and despair in the face of the empty tomb.

Reading Mark's Gospel as an exemplary text, Thate examines what he considers to be retellings of other traumatic experiences—the stories of Jesus's exorcising demons out of a man and into a herd of swine, his stilling of the storm, and his walking on the water. Drawing widely on a diverse set of resources that include the canon of western fiction, classical literature, the psychological study of trauma, phenomenological philosophy, the new materialism, psychoanalytic theory, poststructural philosophy, and Hebrew Bible scholarship, as well as the expected catalog of New Testament tools of biblical criticism in general and Markan scholarship in particular, The Godman and the Sea is an experimental reading of the Gospel of Mark and the social force of the sea within its traumatized world. More fundamentally, however, it attempts to position this reading as a story of trauma, ecstasy, and what has become through the ruins of past pain.

"Thate’s book is a significant contribution to the study of the Gospel of Mark, which may provide an enduring space of reflection from the perspective of trauma studies for years to come."—Review of Biblical Literature

"An erudite and groundbreaking work that advances a new reading of Mark's Gospel at a time when attention to the study of trauma is making an impact on biblical scholarship, The Godman and the Sea is a book that not only New Testament scholars but also theologians and philosophers more generally will turn to as a watershed study."—Harry Maier, Vancouver School of Theology

"Michael Thate is a powerful new intellectual voice capable of transforming our understanding of an exceedingly familiar gospel from the New Testament. His book is an extraordinary achievement that presents us with a compelling rewiring of the historical, textual, and conceptual potential of early Jewish and Christian experience for other canons which also shape us, generally without our realizing it."—Ward Blanton, University of Kent