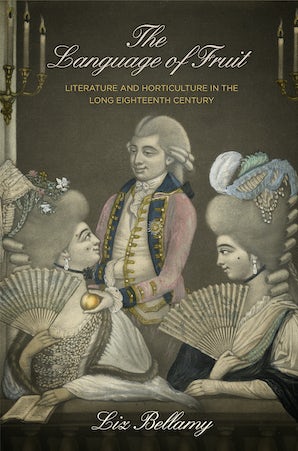 The Language of Fruit

Literature and Horticulture in the Long Eighteenth Century

In The Language of Fruit, Liz Bellamy explores how poets, playwrights, and novelists from the Restoration to the Romantic era represented fruit and fruit trees in a period that saw significant changes in cultivation techniques, the expansion of the range of available fruit varieties, and the transformation of the mechanisms for their exchange and distribution. Although her principal concern is with the representation of fruit within literary texts and genres, she nevertheless grounds her analysis in the consideration of what actually happened in the gardens and orchards of the past.

As Bellamy progresses through sections devoted to specific literary genres, three central "characters" come to the fore: the apple, long a symbol of natural abundance, simplicity, and English integrity; the orange, associated with trade and exchange until its "naturalization" as a British resident; and the pineapple, often figured as a cossetted and exotic child of indulgence epitomizing extravagant luxury. She demonstrates how the portrayal of fruits within literary texts was complicated by symbolic associations derived from biblical and classical traditions, often identifying fruit with female temptation and sexual desire. Looking at seventeenth-century poetry, Restoration drama, eighteenth-century georgic, and the Romantic novel, as well as practical writings on fruit production and husbandry, Bellamy shows the ways in which the meanings and inflections that accumulated around different kinds of fruit related to contemporary concepts of gender, class, and race.

Examining the intersection of literary tradition and horticultural innovation, The Language of Fruit traces how writers from Andrew Marvell to Jane Austen responded to the challenges posed by the evolving social, economic, and symbolic functions of fruit over the long eighteenth century.

"[A] wide-ranging and informative book, which promises to enrich the field of postcolonial ecocriticism . . . Bellamy's methodological gambit is impressive, building upon historicist approaches to agrarian discourse as well as the recent insights of ecocriticism."—Modern Philology

"Bellamy incorporates an ambitious array of horticultural texts, agricultural treatises, poems, plays, and novels into a nuanced discussion of the significance of fruit throughout English literary history . . . [and] demonstrates her facility with close reading and analysis across genres, producing a volume that is enjoyable and insightful in equal measure . . . The expertise she reflects not only in literary analysis but also in the history of horticulture from the medieval period to the Romantic period and beyond makes this book shine. A valuable and brilliant contribution to the study of literature in England."—Eighteenth-Century Fiction

"[A] fascinating work of ecocriticism, illustrating how fruit has been meaningful in the English imaginary over time. In richly detailed prose Bellamy provides insights both diachronic and synchronic, tying together the ways that fruit husbandry in general, and particular fruits such as pears, oranges, pineapples, and melons-as represented in works of literature-convey information about the contemporary society of the authors."—Choice

"Bellamy’s Language of Fruit is an enlightening study of the intertwined fortunes of fruit growing and the subtle ways in which depictions of particular fruits convey meaning in literary texts. The insights in this book are subtle but effective. For example, we would have known that Pinchwife’s objection to Horner squeezing his orange equated Margery with an eroticized fruit popular at the theater. Still, the particular cultural meaning of the orange as an expensive treat, an Iberian import, an occasional hothouse product, and a lucrative business for a woman proprietor makes a difference in the way we see this moment."—Restoration Journal

"Interweaving a bounty of historical details, in-depth literary readings, and engaging illustrations, Liz Bellamy tells a fascinating story about the evolution of raising, eating, thinking, and writing about fruit in the long eighteenth century."—Rebecca Bushnell, University of Pennsylvania