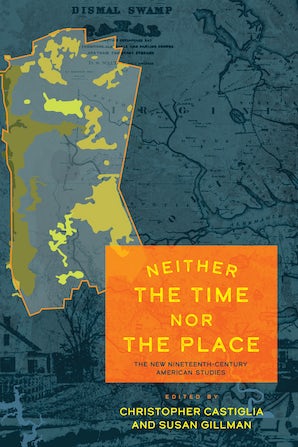 Neither the Time nor the Place

The usefulness of time and place as defining categories would seem to be baked into the very notion of nineteenth-century American literary studies, yet they have challenged scholars practically since the field's inception. In Neither the Time nor the Place seventeen critics consider how the space-time dyad has both troubled and invigorated Americanist scholarship in recent decades and make explicit how time and place are best considered in tandem, interrogating each other.

Taken together, the essays challenge depictions of place and time as bounded and linear, fixed and teleological, or mere ideological constructions. They address both familiar and unexpected objects, practices, and texts, including a born-digital Melville, documents from the construction of the Panama Canal, the hollow earth, the desiring body, textual editing, marble statuary, the sound of frogs, spirit photography, and twentieth-century Civil War fiction. The essays draw on an equally wide variety of critical methodologies, integrating affect studies, queer theory, book history, information studies, sound studies, environmental humanities, new media studies, and genre theory to explore the unexpected dimensions that emerge when time and place are taken as a unit. The pieces are organized around considerations of citizenship, environment, historiography, media, and bodies—five political, cultural, and/or methodological foci for some of the most provocative new work being done in American literary studies.

Neither the Time nor the Place is a book not only for scholars and students already well grounded in the study of nineteenth-century American literature and culture, but for anyone, scholar or student, looking for a roadmap to some of the most vibrant work in the field.