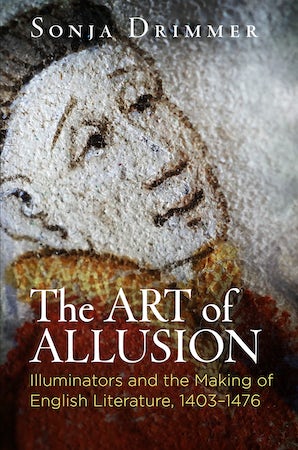 The Art of Allusion

Illuminators and the Making of English Literature, 1403-1476

At the end of the fourteenth and into the first half of the fifteenth century Geoffrey Chaucer, John Gower, and John Lydgate translated and revised stories with long pedigrees in Latin, Italian, and French. Royals and gentry alike commissioned lavish manuscript copies of these works, copies whose images were integral to the rising prestige of English as a literary language. Yet despite the significance of these images, manuscript illuminators are seldom discussed in the major narratives of the development of English literary culture.

The newly enlarged scale of English manuscript production generated a problem: namely, a need for new images. Not only did these images need to accompany narratives that often had no tradition of illustration, they also had to express novel concepts, including ones as foundational as the identity and suitable representation of an English poet. In devising this new corpus, manuscript artists harnessed visual allusion as a method to articulate central questions and provide at times conflicting answers regarding both literary and cultural authority.

Sonja Drimmer traces how, just as the poets embraced intertexuality as a means of invention, so did illuminators devise new images through referential techniques—assembling, adapting, and combining images from a range of sources in order to answer the need for a new body of pictorial matter. Featuring more than one hundred illustrations, twenty-seven of them in color, The Art of Allusion is the first book devoted to the emergence of England's literary canon as a visual as well as a linguistic event.

PART I. ILLUMINATORS
Chapter 1. The Illuminators of London

"Sonja Drimmer's book is a remarkable work of discovery and synthesis, the product of original archival work conducted over a decade. Her scholarship combines the techniques of the art historian (visual analysis and comparison, careful observation) and the literary scholar (she analyses the Middle English adeptly) . . . [T]his book will be timeless . . . [R]ead it, for the ideas, for the thrill of exploring archives with such an able guide, and also for the pleasure of the language."—English Historical Review

"Written with verve and energy, Sonja Drimmer's new book is an excellent contribution to a vital, discipline-wide conversation about the importance of visual images in late medieval manuscripts . . . Drimmer's training in visual traditions is matched by her commitment to engaging both the literature of late medieval England and its scholarship. Our disciplines need practitioners who assiduously strive not to theorize the primacy of either words or images. Drimmer is to be congratulated for bringing her discipline's insights and methods right into the core of late medieval literary production in a book that will generate ideas for scholars working in a wide range of fields."—Studies in the Age of Chaucer

"[B]eautiful . . . In elegant prose, Sonja Drimmer treats such phenomena as authorial portraits, illuminators' engagements with the text, and the re-use of a single volume over time, leaving no doubt about the sophistication of medieval limners and the scholarly imperative to attend carefully to their work . . . This astounding book demonstrates, in large part because of the efforts of their illuminators, chief among whom is Drimmer herself, that these manuscripts of Gower and Lydgate ought now to make up a new English canon."—Speculum

"This is a complex and intellectually stimulating book, restless with ideas and extending its reach into more corners of manuscript studies than most scholars would feel qualified to take on in one effort . . . Drimmer's book is commendably courageous in taking seriously a division of English medieval art that has been broadly neglected, and highly refreshing in its push back against the dominant assumptions that art-and particularly illumnination-was historically and contextually conditioned . . . [F]rom any angle the book surely represents an important advance on existing ideas, and where the history fifteenth-century illumination is concerned, it may well prove to be a game-changer."—Journal of the Early Book Society

"In her provocative and stimulating The Art of Allusion, Sonja Drimmer argues for the significance of manuscript illuminators as dynamic participants in the spread and interpretation of the vernacular English literature in the fifteenth century. Specifically, Drimmer offers the first book-length study to consider the 'emergence of England's literary canon as a visual and linguistic event' . . . This lively and engaging study is beautifully produced and illustrated. Drimmer's style is accessible and thoughtful . . . Drimmer is to be highly commended for this fresh appraisal of the work of the fifteenth-century illuminators."—Journal of British Studies

"Sonja Drimmer's The Art of Allusion is a welcome addition to the field of late-medieval English manuscript studies. Ambitious, well-organized, cogently argued, it both energizes and revises earlier scholarly approaches to its subject . . . Her book is a thorough art historical study that manages a feat of noteworthy interdisciplinarity through its marriage with textual studies."—The Medieval Review

"An excellent book, truly groundbreaking in approach, and an important contribution to the understanding of late medieval English literary manuscripts, their production, and their illustration."—Richard K. Emmerson, Florida State University

"The Art of Allusion is full of new and fascinating insights. Sonja Drimmer convincingly argues that the work of illustration both responds and contributes to the entry and circulation of new ideas about English vernacular literary authorship, political history, and book production itself in the fifteenth century."—Alexandra Gillespie, University of Toronto