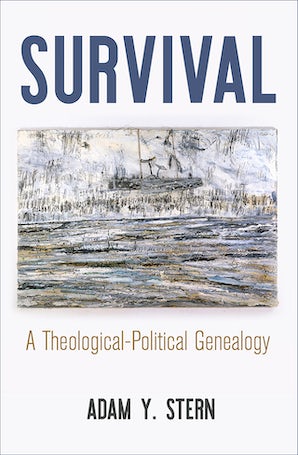 For a world mired in catastrophe, nothing could be more urgent than the question of survival. In this theoretically and methodologically groundbreaking book, Adam Y. Stern calls for a critical reevaluation of survival as a contemporary regime of representation.

In Survival, Stern asks what texts, what institutions, and what traditions have made survival a recognizable element of our current political vocabulary. The book begins by suggesting that the interpretive key lies in the discursive prominence of "Jewish survival." Yet the Jewish example, he argues, is less a marker of Jewish history than an index of Christianity's impact on the modern, secular, political imagination. With this inversion, the book repositions Jewish survival as the supplemental effect and mask of a more capacious political theology of Christian survival.

The argument proceeds by taking major moments in twentieth-century philosophy, theology, and political theory as occasions for collecting the scattered elements of survival's theological-political archive. Through readings of canonical texts by secular and Jewish thinkers—Hannah Arendt, Walter Benjamin, Franz Rosenzweig, and Sigmund Freud—Stern shows that survival belongs to a history of debates about the sovereignty and subjection of Christ's body. Interrogating survival as a rhetorical formation, the book intervenes in discussions about biopolitics, secularism, political theology, and the philosophy of religion.

"Adam Stern's remarkable book offers a set of lucidly argued readings of twentieth-century German-Jewish thinkers through the prism of 'survival.' Joining biopolitics to theology, he constructs a revelatory critical genealogy of survival by tracing the importance of a Christian-inflected discussion of survival in Jewish thought, and outlines its political forms. Casting a critical eye on competing claims to sovereignty, Stern shows how all sacralizing discourses about survival-including Israeli military mobilizations-paper over the fragility of the mortal body. His is an original, highly innovative work that is deeply informed and rigorously argued."—Carolyn J. Dean, Yale University

"Adam Stern's innovative and astute study of the concept of survival is both expansively far-reaching and acutely focused. One might mistakenly think that the work is another survey of a certain line of twentieth-century German-Jewish thought. In fact, it is a work on the Christian logic that pervades these thinkers. Stern's analysis ranges masterfully from Pseudo-Dionysius to Shakespeare, to tell its own story about the surreptitious power of Christianity. Stern decenters the concept of survival, which has become so frequently synonymous with post-Holocaust Judaism, and reveals how the image of resurrection is in fact its driving force."—Sarah Hammerschlag, University of Chicago