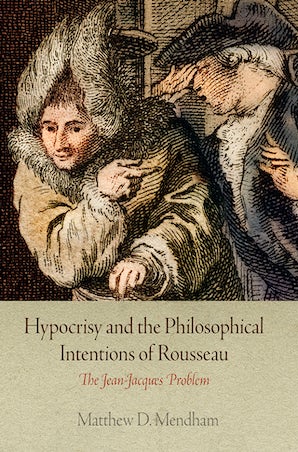 Hypocrisy and the Philosophical Intentions of Rousseau

Why did Rousseau fail—often so ridiculously or grotesquely—to live up to his own principles? In one of the most notorious cases of hypocrisy in intellectual history, this champion of the joys of domestic life immediately rid himself of each of his five children, placing them in an orphans' home. He advocated profound devotion to republican civic life, and yet he habitually dodged opportunities for political engagement. Finally, despite an elevated ethics of social duty, he had a pattern of turning against his most intimate friends, and ultimately fled humanity and civilization as such.

In Hypocrisy and the Philosophical Intentions of Rousseau, Matthew D. Mendham is the first to systematically analyze Rousseau's normative philosophy and self-portrayals in view of the yawning gap between them. He challenges recent approaches to "the Jean-Jacques problem," which tend either to dismiss his life or to downgrade his principles. Engaging in a comprehensive and penetrating analysis of Rousseau's works, including commonly neglected texts like his untranslated letters, Mendham reveals a figure who urgently sought to reconcile his life to his most elevated principles throughout the period of his main normative writings. But after the revelation of the secret about his children, and his disastrous stay in England, Rousseau began to shrink from the ambitious philosophical life to which he had previously aspired, newly driven to mitigate culpability for his discarded children, to a new quietism regarding civic engagement, and to a collapse of his sense of social duty. This book provides a moral biography in view of Rousseau's most controversial behaviors, as well as a preamble to future discussions of the spirit of his thought, positing a development more fundamental than the recent paradigms have allowed for.

"Matthew D. Mendham has given us a genuinely valuable book. It is scholarly in the best sense: deeply familiar with its subject, fair-minded in evaluating competing views, penetrating in analysis, quietly witty at times, and free of jargon. Badly as this study is needed, Mendham is the first to attempt anything like it."—Leo Damrosch, Harvard University

"Matthew D. Mendham displays an extraordinary degree of research into relevant primary and secondary texts to explore Rousseau's life in context. This includes sources that are frequently neglected in the secondary literature, such as his untranslated letters. As readers will see, everything in this book has been meticulously documented and researched."—David Lay Williams, DePaul University