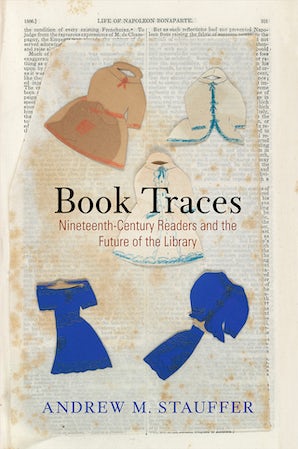 Nineteenth-Century Readers and the Future of the Library

In most college and university libraries, materials published before 1800 have been moved into special collections, while the post-1923 books remain in general circulation. But books published between these dates are vulnerable to deaccessioning, as libraries increasingly reconfigure access to public-domain texts via digital repositories such as Google Books. Even libraries with strong commitments to their print collections are clearing out the duplicates, assuming that circulating copies of any given nineteenth-century edition are essentially identical to one another. When you look closely, however, you see that they are not.

Many nineteenth-century books were donated by alumni or their families decades ago, and many of them bear traces left behind by the people who first owned and used them. In Book Traces, Andrew M. Stauffer adopts what he calls "guided serendipity" as a tactic in pursuit of two goals: first, to read nineteenth-century poetry through the clues and objects earlier readers left in their books and, second, to defend the value of keeping the physical volumes on the shelves. Finding in such books of poetry the inscriptions, annotations, and insertions made by their original owners, and using them as exemplary case studies, Stauffer shows how the physical, historical book enables a modern reader to encounter poetry through the eyes of someone for whom it was personal.

"Book Traces is an extraordinary work of scholarship—astute, humane, and methodologically innovative. But its greatest contribution might be in warning scholars of nineteenth-century literature that we should act before we lose a vast, largely unstudied archive of nonrare editions full of utterly unique observations by nineteenth-century readers."—Modern Philology

"What do we hope to learn from our textual artifacts? Examining their textuality in conjunction with their materiality, we scour them for signs they were and were not designed to reveal about their ideation, composition, publication, reproduction, remediation, distribution, circulation, reception and even their destruction…It is refreshing to read a scholarly monograph in which all of that — love, hope, devotion — is right up front, coupled unapologetically with meticulous and imaginative bibliographic scholarship…Stauffer has done his job, much more than his job, advocating passionately and knowledgeably for the archive he cares about as a scholar of nineteenth-century literature and textual materiality."—Textual Cultures

"Book Traces is a rallying call to scholars to explore nineteenth-century editions in circulating collections, but it works more broadly as a reminder that increasing use of digitised materials comes at a cost. Although Stauffer’s rich book makes a solid case forthepresentvalueofthesecollections,his argument for preserving ‘bibliodiversity’ is grounded in protecting what we have yet to find."—British Association for Victorian Studies

"Andrew Stauffer focuses on the smallest traces of reader response—pencil marks left in the margins, brackets inked around significant words, leaves and flowers pressed between pages—to write a book about some of the biggest issues facing libraries and the study of historical literary cultures today...Stauffer’s study not only points to new ways of engaging with historical readers and reading practices; it also encourages us to rethink and reaffirm the value of physical library collections in a digital age."—Library & Information History

"This is a beautiful, elegant work: an intimate journey into the poetry of nineteenth-century readers' lives and books and an eloquent defense of libraries and the humanities."—Michael C. Cohen, author of The Social Lives of Poems in Nineteenth-Century America