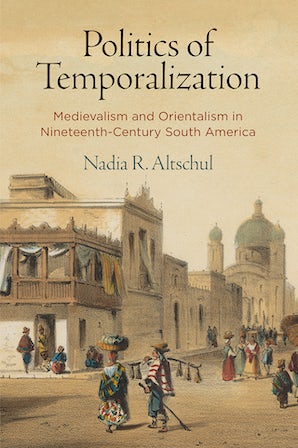 If Spain and Portugal were perceived as backward in the nineteenth century—still tainted, in the minds of European writers and thinkers, by more than a whiff of the medieval and Moorish—Ibero-America lagged even further behind. Originally colonized in the late fifteenth century, Chile, Argentina, and Brazil were characterized by European travelers and South American elites alike as both feudal and oriental, as if they retained an oriental-Moorish character due to the centuries-long presence of Islam in the Iberian Peninsula. So, Nadia R. Altschul observes, the Scottish metropolitan writer Maria Graham (1785-1842) depicted the Chile in which she found herself stranded after the death of her sea captain husband as a premodern, precapitalist, and orientalized place that could only benefit from the free trade imperialism of the British. Domingo F. Sarmiento (1811-1888), the most influential Latin American writer and statesman of his day, conceived of his own Euro-American creole class as medieval in such works as Civilization and Barbarism: The Life of Juan Facundo Quiroga (1845) and Recollections of a Provincial Past (1850), and wrote of the inherited Moorish character of Spanish America in his 1883 Conflict and Harmony of the Races in America. Moving forward into the first half of the twentieth century, Altschul explores the oriental character that Gilberto Freyre assigned to Portuguese colonization in his The Masters and the Slaves (1933), in which he postulated the "Mozarabic" essence of Brazil.

In Politics of Temporalization, Altschul examines the case of South America to ask more broadly what is at stake—what is harmed, what is excused—when the present is temporalized, when elements of "the now" are characterized as belonging to, and consequently imposed upon, a constructed and othered "past."

"[A] vital contribution to the intellectual history of Latin America. Focused on a selection of texts drawn from the century after independence, Altschul explores how the (entwined) processes/actions of medievalization and orientalization helped legitimize the region’s violent subordination by global capitalism during the nineteenth century…A masterful achievement, Politics of Temporalization should become a paradigmatic must-read for students of the Iberian Atlantic and its intellectual history."—Bulletin of Spanish Studies

"Nadia R. Altschul traces the mutating ways in which medieval and oriental temporalizations are used by Latin American thinkers from the late eighteenth through the nineteenth centuries to establish hegemonic understandings of their societies, particularly their inequalities and unevennesses. In so doing, Altschul makes an original and substantial contribution to Latin American and transatlantic studies. Politics of Temporalization is exceptional."—Mary Louise Pratt, New York University

"Politics of Temporalization is a truly exciting theoretical intervention. Nadia R. Altschul not only presents a rich case study but, more broadly, shows how temporalization and orientalization are always deployed, rather than inherent in their objects. Her scholarly range is phenomenal, and she elucidates important implications for how Latin America is perceived."—Barbara Fuchs, University of California, Los Angeles