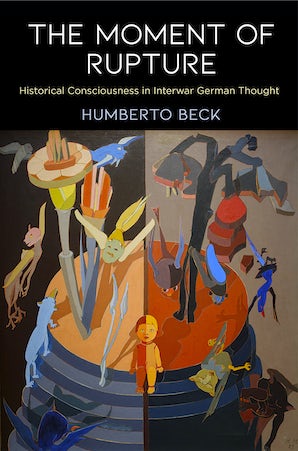 The Moment of Rupture

An instant is the shortest span in which time can be divided and experienced. In an instant, there is no duration: it is an interruption that happens in the blink of an eye. For the ancient Greeks, kairos, the time in which exceptional, unrepeatable events occurred, was opposed to chronos, measurable, quantitative, and uniform time. In The Moment of Rupture, Humberto Beck argues that during the years of the First World War, the Russian Revolution, and the rise of fascism in Germany, the notion of the instant migrated from philosophy and aesthetics into politics and became a conceptual framework for the interpretation of collective historical experience that, in turn, transformed the subjective perception of time.

According to Beck, a significant juncture occurred in Germany between 1914 and 1940, when a modern tradition of reflection on the instant—spanning the poetry of Goethe, the historical self-understanding of the French Revolution, the aesthetics of early Romanticism, the philosophies of Søren Kierkegaard and Friedrich Nietzsche, and the artistic and literary practices of Charles Baudelaire and the avant gardes—interacted with a new experience of historical time based on rupture and abrupt discontinuity. Beck locates in this juncture three German thinkers—Ernst Jünger, Ernst Bloch, and Walter Benjamin—who fused the consciousness of war, crisis, catastrophe, and revolution with the literary and philosophical formulations of the instantaneous and the sudden in order to intellectually represent an era marked by the dissolution between the extraordinary and the everyday. The Moment of Rupture demonstrates how Jünger, Bloch, and Benjamin produced a constellation of figures of sudden temporality that contributed to the formation of what Beck calls a distinct "regime of historicity," a mode of experiencing time based on the notion of a discontinuous present.

Introduction
Chapter 1. The Instant from Goethe to Nietzsche: The Modern Beginnings of a Concept
Chapter 2. The Instant of the Avant-Garde
Chapter 3. Ernst Jünger and the Instant of Crisis
Chapter 4. Ernst Bloch and the Temporality of the Not-Yet
Chapter 5. Walter Benjamin and the Now-Time of History
Conclusion. Instantaneism as a Regime of Historicity
Notes
Index
Acknowledgments

"[A] fascinating and suggestive book . . . The intellectual framework of The Moment of Rupture successfully demonstrates the importance of the instantanteist chronotrope and shows how it emerged from the history of philosophy to take center stage in the interwar Weimar Republic.""—Contemporary Political Theory

Beck makes a potent case for the historical significance of instantaneity, and he shows convincingly that the way we understand time underpins our response to crises. Even as we ponder the wholesale changes demanded by today’s pandemic, it is useful and bracing to see how earlier thinkers sought visions of political transformation in moments of rupture.

"Compelling...[The Moment of Rupture] is a compact, lucid, and enjoyably biographical study of an intellectual and world-historical interregnum that has only become more significant for how we understand our histories a century later."—The Marginalia Review of Books

"Connecting a trajectory of aesthetic thought that began in the eighteenth century with a vision of a radically different future, The Moment of Rupture shows how the complex and multifaceted conception of the 'instant' in Weimar culture was central to the political philosophy that sought to transcend Germany's first republic. Humberto Beck persuasively argues that Ernst Jünger, Ernst Bloch, and Walter Benjamin are, from very different angles, reflecting on a particular and peculiar sense of time and crisis in their works."—Carl Caldwell, Rice University