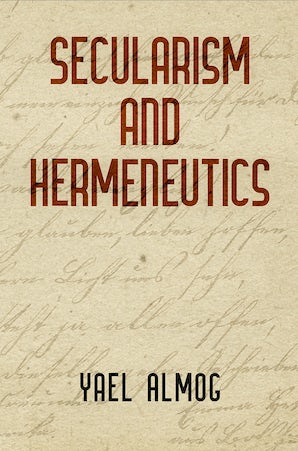 In the late Enlightenment, a new imperative began to inform theories of interpretation: all literary texts should be read in the same way that we read the Bible. However, this assumption concealed a problem—there was no coherent "we" who read the Bible in the same way. In Secularism and Hermeneutics, Yael Almog shows that several prominent thinkers of the era, including Johann Gottfried Herder, Moses Mendelssohn, Immanuel Kant, Georg Wilhelm Friedrich Hegel, and Friedrich Daniel Ernst Schleiermacher, constituted readers as an imaginary "we" around which they could form their theories and practices of interpretation. This conception of interpreters as a universal community, Almog argues, established biblical readers as a coherent collective.

In the first part of the book, Almog focuses on the 1760s through the 1780s and examines these writers' works on biblical Hebrew and their reliance on the conception of the Old Testament as a cultural, rather than religious, asset. She reveals how the detachment of textual hermeneutics from confessional affiliation was stimulated by debates on the integration of Jews in Enlightenment Germany. In order for the political community to cohere, she contends, certain religious practices were restricted to the private sphere while textual interpretation, which previously belonged to religious contexts, became the foundation of the public sphere. As interpretive practices were secularized and taken to be universal, they were meant to overcome religious difference. Turning to literature and the early nineteenth century in the second part of the book, Almog demonstrates the ways in which the new literary genres of realism and lyric poetry disrupted these interpretive reading practices. Literary techniques such as irony and intertextuality disturbed the notion of a stable, universal reader's position and highlighted interpretation as grounded in religious belonging.

Secularism and Hermeneutics reveals the tension between textual exegesis and confessional belonging and challenges the modern presumption that interpretation is indifferent to religious concerns.

Introduction. Secularism and Hermeneutics: The Rise of Modern Readership
Chapter 1. Rescuing the Text
Chapter 2. Hermeneutics and Affect
Chapter 3. Perilous Script
Chapter 4. On Jews and Other Bad Readers
Chapter 5. The Return of the Repressed Bible
Coda. Beyond Hermeneutic Thinking

"Secularism and Hermeneutics is an important work that contains much that will be of interest to any practitioners of biblical studies. Almog's 'genealogy' of the modern universal reading subject presents a bold challenge to those who wish to see the guild operate in a purely 'secular' fashion, as it likewise may unsettle some confessional readers who hold to a 'historical, grammatical' hermeneutic based on 'authorial intent.' Given that many standard surveys of hermeneutics start with Schleiermacher, Almog's point that Schleiermacher's emphasis on the author functioned as a replacement for Herder's emphasis on culture will probably be a significant insight for many readers from a biblical studies background, as this provides a historical background for a platform that often seems to have emerged as a reaction against mere philology or heavy-handed church tradition."—Review of Biblical Literature

"Secularism and Hermeneutics is a well- executed, densely packed text that has the potential to open new vistas on not only the key themes of secularity and hermeneutics of the eighteenth and nineteenth centuries, but also the contemporary state of critique itself. Almog has given her readers much to consider with this generative text. A careful read is worth the time."—Religious Studies Review

"[O]ne of the most stimulating scholarly monographs I’ve read recently. Almog focuses on how the thinkers of the German Enlightenment — especially Johann Gottfried Herder, Friedrich Schleiermacher, Johann Michaelis, and Moses Mendelssohn — helped transform the Old Testament into a work of universally resonant world literature, in the process establishing interpretive norms for literary reading as such. Secularism and Hermeneutics is a history not just of biblical reception, but of the development of literary theory."—The Chronicle of Higher Education

"[Secularism and Hermeneutics'] primary project is beautifully executed, and what it promises at the outset, it delivers. The book is, in a word, excellent, and the careful way it treats 'difficult' texts and communities is exemplary. It will be of value for anyone interested in a non-polemic history of secularism, in Jewish-German intellectual relations in the eighteenth century, or in a historically situated history of reading, as well as for those who wish to better understand the political-theological origins of contemporary liberal-secularism."—Eighteenth-Century Studies

"Yael Almog explores the centrality of Biblical interpretation, in the critical period 1750-1850, to the shifting configuration of secularization, hermeneutics and politics. She convincingly shows through original and detailed studies of such figures as Herder, Mendelssohn, Heine, Hegel, and Schleiermacher, that the emergence of a new aesthetics derived from changing interpretations of the Old Testament and that, in turn, the advent of a new 'reader' was constitutive for the appearance of a new citizen."—David Sorkin, Yale University

"Yael Almog demonstrates a broad knowledge of the literature on the topic of secularization and hermeneutics and her analysis is clear, lively, and convincing. Her book is an original and significant contribution to the fields of religious studies, eighteenth- and nineteenth-century literature, intellectual history, and philosophical hermeneutics."—Jeffrey Andrew Barash, Université de Picardie, Amiens, France

"Secularism and Hermeneutics shows how the most important philosophers constructed or envisioned interpreters of the Bible and other texts in different movements and time periods. The tension Yael Almog describes between the reader as an individual and as a member of a political or religious collective is fascinating."—Abigail Gillman, Boston University