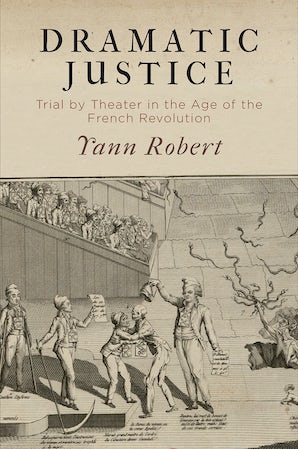 Trial by Theater in the Age of the French Revolution

For most of the seventeenth and eighteenth centuries, classical dogma and royal censorship worked together to prevent French plays from commenting on, or even worse, reenacting current political and judicial affairs. Criminal trials, meanwhile, were designed to be as untheatrical as possible, excluding from the courtroom live debates, trained orators, and spectators. According to Yann Robert, circumstances changed between 1750 and 1800 as parallel evolutions in theater and justice brought them closer together, causing lasting transformations in both.

Robert contends that the gradual merging of theatrical and legal modes in eighteenth-century France has been largely overlooked because it challenges two widely accepted narratives: first, that French theater drifted toward entertainment and illusionism during this period and, second, that the French justice system abandoned any performative foundation it previously had in favor of a textual one. In Dramatic Justice, he demonstrates that the inverse of each was true. Robert traces the rise of a "judicial theater" in which plays denounced criminals by name, even forcing them, in some cases, to perform their transgressions anew before a jeering public. Likewise, he shows how legal reformers intentionally modeled trial proceedings on dramatic representations and went so far as to recommend that judges mimic the sentimental judgment of spectators and that lawyers seek private lessons from actors. This conflation of theatrical and legal performances provoked debates and anxieties in the eighteenth century that, according to Robert, continue to resonate with present concerns over lawsuit culture and judicial entertainment.

Dramatic Justice offers an alternate history of French theater and judicial practice, one that advances new explanations for several pivotal moments in the French Revolution, including the trial of Louis XVI and the Terror, by showing the extent to which they were shaped by the period's conflicted relationship to theatrical justice.

PART I. THEATER AS JUSTICE
Chapter 1. Fixing the Law: Reenactment in Diderot's Fils naturel
Chapter 2. The Many Faces of Aristophanes: The Rise of a Judicial Theater

PART II. JUSTICE AS THEATER
Chapter 3. Players at the Bar: The Birth of the Modern Lawyer
Chapter 4. Judges, Spectators, and Theatrocracy
Chapter 5. From Parterre to Pater: Dreaming of Domestic Tribunals

PART III. THE REVOLUTION'S PERFORMANCE OF JUSTICE
Chapter 6. Performing Justice in the Early Years of the Revolution
Chapter 7. The Curtain Falls on Judicial Theater and Theatrical Justice

"[O]ne of the last decade's most important books on eighteenth-century theater . . . Readers should not be fooled by the title: this book is not just about trials or plays depicting trials. Dramatic Justice is a meticulously researched coup against the idea that transparency and progress were uncontroversial values among the Revolution's most vocal proponents of liberalism . . . Robert's theorization of reenactment should be studied by contemporary performance scholars and his lucid explanation of Robespierre's (self-described) Socratic death would help students of all levels and disciplines understand the Revolution's most startling paradoxes. Robert has written an excellent book on eighteenth-century theater that resonates with today's trial practices, where tensions between accuracy and openness, due process and "purely theatrical spectacles" have not lost their vigor."—The French Review

"Robert richly and compellingly illustrates the promise and peril that theatricality represented for legal reformers between 1750 and 1800. Dramatic Justice describes in great detail both the reform of French legal proceedings during the Revolution and the debates that preceded and attended it . . . Robert succeeds in challenging some commonly accepted notions about eighteenth-century theater and justice in France."—Modern Philology

"[O]ne of the most important recent contributions to the growing scholarship on French Revolutionary drama...[Yann's] study will be appreciated for its interdisciplinary scope, lucid writing, and stimulating polemic (and charming predilection for exclamation points!). The impressive wealth of material and topics explored both illuminates underexplored pockets of the archive and offers new insight into well-known texts by leading Enlightenment figures...[A] tour de force that will be required reading for anyone working on theatre and history of the French Enlightenment and Revolution."—Theatre Survey

"[A] very substantial, well-made and thought-provoking monograph, and an important contribution to understanding the cultural politics of revolutionary France . . . Robert's research [is] a richly complex landscape in which French thinkers wrestled with the dilemma of judicial theatricality, as they wrestled with the wider cultural question of the theatrical, the performative and the emotional in public life."—English Historical Review

"This book constitutes a bold and detailed look at the relationship between theatre and justice in 'the Age of the French Revolution . . . ' Robert offers genuinely new readings of many plays and a sophisticated model for further analysis."—French Studies

"[O]riginal perspectives on French revolutionary justice and the significant transformation in the relation between representations of justice in the theatre and actual legal proceedings that occurred in the latter half of the eighteenth century . . . Through his incisive history of the intellectual, symbolic, and practical exercise of justice in the years before and during the Revolution, Robert oﬀers an alternative to the political lens that informs prevailing narratives."—Modern Language Review

"Dramatic Justice is an impressive and erudite study that elucidates theatre’s complicated relationship with the law and underscores the power of antitheatrical thinking in dramatic and nondramatic realms...[I]t is hard to do justice to the intricacy and breadth of Robert’s scholarship or to the range of his legal, literary, and dramatic sources. Dramatic Justice is essential reading for anyone concerned with eighteenth-century France, with theatre and drama studies, and with the historical, cultural, and legal worlds of the late eighteenth century."—Theatre Journal

"Yann Robert’s Dramatic Justice provides a wonderful reading of 'judicial theater,' a term [Robert] coins to designate those plays that sought to reenact recent events taken from political life and that functioned to retry the matter before their spectators...[A] bold and original contribution to eighteenth-century French theater studies."—Modern Language Notes

"No one has pursued the arguments for and against theatricalizing justice across the Enlightenment and Revolutionary periods as thoroughly as Yann Robert does in this excellent book."—Jeffrey S. Ravel, Massachusetts Institute of Technology

"In Dramatic Justice, Yann Robert offers an original, nuanced, and convincing analysis of the interplay between justice, legitimacy, and representation in France in the second half of the eighteenth century."—Thomas Wynn, Durham University