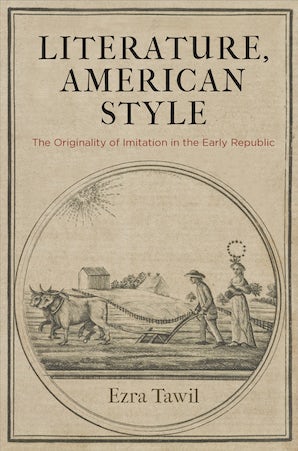 The Originality of Imitation in the Early Republic

Between 1780 and 1800, authors of imaginative literature in the new United States wanted to assert that their works, which bore obvious connections to anglophone literature on the far side of the Atlantic, nevertheless constituted a properly "American" tradition. No one had yet figured out, however, what it would mean to write like an American, what literature with an American origin would look like, nor what literary characteristics the elusive quality of Americanness could generate. Literature, American Style returns to this historical moment—decades before the romantic nationalism of Cooper, the transcendentalism of Emerson and Thoreau, or the iconoclastic poetics of Whitman—when a fantasy about the unique characteristics of U.S. literature first took shape, and when that notion was linked to literary style.

While late eighteenth-century U.S. literature advertised itself as the cultural manifestation of a radically innovative nation, Ezra Tawil argues, it was not primarily marked by invention or disruption. In fact, its authors self-consciously imitated European literary traditions while adapting them to a new cultural environment. These writers gravitated to the realm of style, then, because it provided a way of sidestepping the uncomfortable reality of cultural indebtedness; it was their use of style that provided a way of departing from European literary precedents. Tawil analyzes Noah Webster's plan to reform the American tongue; J. Hector St. John de Crèvecoeur's fashioning of an extravagantly naïve American style from well-worn topoi; Charles Brockden Brown's adaptations of the British gothic; and the marriage of seduction plots to American "plain style" in works such as Susanna Rowson's Charlotte Temple and Hannah Webster Foster's The Coquette. Each of these works claims to embody something "American" in style yet, according to Tawil, remains legible only in the context of stylistic, generic, and conceptual forms that animated English cultural life through the century.

"[Tawil's] fresh and illuminating readings of major works of the 1780s and '90s will make Literature, American Style an important book for early Americanists. But what will make this book important for a wide range of scholars working on the long history of American literature is its reframing of the issue of literary Americanness. One of the signature achievements of Literature, American Style is the synthesis it provides of the divergent lines of scholarship focused on national distinctiveness and transatlantic indebtedness, respectively."—Early American Literature

"[A] masterful treatise . . . {An] excellent, learned study . . . Literature, American Style makes a substantial contribution to the study of early national literary culture from which future scholars of the period will greatly profit."—American Literary History

"[F]or readers interested in this dialectic and in parsing the tangled literary relationship between Britain and the United States, Tawil's book is essential reading. His own lucid style makes Literature, American Style a pleasure to read."—Studies in the Novel

"In Literature, American Style, Tawil's subject matter is, itself, a crucial intervention in the field of American literary studies because it foregrounds something-the 'choice of words and the manner of arranging them'-that is often ignored . . . What Tawil does remarkably well, and vitally so for the field, is to put a finer point on the intricacies of transatlantic exchange, literary style, and cultural nationalism that critics have too often painted with a broad brush."—Soundings

"Ezra Tawil's Literature, American Style confronts one of the most fundamental problems in the study of US culture: how and why do we claim 'a national tradi-tion' of American literature that can be distinguished from other literatures in English . . . Tawil provides a deeper historical, philosophical and literary context for the enduring allure of the unpolished voice on both sides of the Atlantic.."—Literature & History

"Literature, American Style is a timely and innovative account of some very old-fashioned ideas in American literary studies-nationalism, originality, and style. In Ezra Tawil's engaging, lucid prose, they come alive in ways that reveal American 'exceptionalism' to be a far more important and complex cultural strategy than we have understood it to be."—Edward Cahill, Fordham University