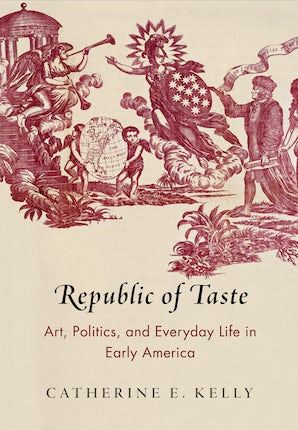 Since the early decades of the eighteenth century, European, and especially British, thinkers were preoccupied with questions of taste. Whether Americans believed that taste was innate—and therefore a marker of breeding and station—or acquired—and thus the product of application and study—all could appreciate that taste was grounded in, demonstrated through, and confirmed by reading, writing, and looking. It was widely believed that shared aesthetic sensibilities connected like-minded individuals and that shared affinities advanced the public good and held great promise for the American republic.

Exploring the intersection of the early republic's material, visual, literary, and political cultures, Catherine E. Kelly demonstrates how American thinkers acknowledged the similarities between aesthetics and politics in order to wrestle with questions about power and authority. Judgments about art, architecture, literature, poetry, and the theater became an arena for considering political issues ranging from government structures and legislative representation to qualifications for citizenship and the meaning of liberty itself. Additionally, if taste prompted political debate, it also encouraged affinity grounded in a shared national identity. In the years following independence, ordinary women and men reassured themselves that taste revealed larger truths about an individual's character and potential for republican citizenship.

Did an early national vocabulary of taste, then, with its privileged visuality, register beyond the debates over the ratification of the Constitution? Did it truly extend beyond political and politicized discourse to inform the imaginative structures and material forms of everyday life? Republic of Taste affirms that it did, although not in ways that anyone could have predicted at the conclusion of the American Revolution.

"Every chapter in Kelly's book, and almost every page, is difficult to put down; the author has a facility with language and argument that makes the reading pleasurable, stimulating, and well-paced . . . [T]hese studies in early national aesthetics are innovative, engaging, and rewarding to read."—Journal of American Culture

"With deft and often graceful erudition, Catherine E. Kelly presents a cultural study of taste within the bourgeoning American Republic as that which entails a series of negotiations and calculated risks . . . If a republic of taste is the book's guiding concept, its explication is judiciously aided by Kelly's pursuit of two lines of inquiry. The first concerns translating aesthetic values into everyday life-what was American taste, anyway, and how could it serve the needs of the Republic? The second explores how the textual, the visual, and the material functioned together. Each of Kelly's six chronological chapters aims to answer such lines of inquiry in the process of providing a history of the American republic of taste. The results are impressive."—Eighteenth Century Fiction

"Republic of Taste plunges readers into the crowded and contested visual culture of the early American republic, from schoolrooms to coffeehouses to museums. With lucid prose and wide-ranging erudition, Catherine E. Kelly invites us literally to see the dazzling multiplicity of the newly United States with fresh eyes."—Jane Kamensky, Harvard University

"Republic of Taste introduces a dazzling array of materials, which Catherine Kelly interprets with wonderful flair and great insight. Our sense of culture and politics in the Early American Republic will never be quite the same."—Ann Vincent Fabian, Rutgers University-New Brunswick

"Republic of Taste is a provocative exploration of the complex interplay of reading, writing, and looking in the republican culture of taste."—Karen Halttunen, University of Southern California