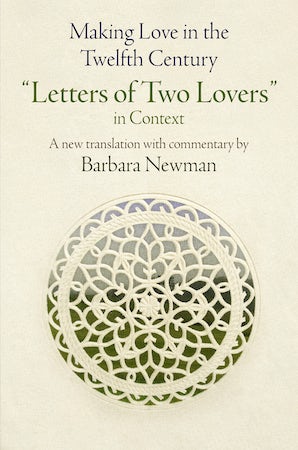 Making Love in the Twelfth Century

"Letters of Two Lovers" in Context

New, sparkling translations of the Letters of Two Lovers, the Tegernesee Letters, and selections from the Regensburg Songs

Nine hundred years ago in Paris, a teacher and his brilliant female student fell in love and chronicled their affair in a passionate correspondence. Their 116 surviving letters, some whole and some fragmentary, are composed in eloquent, highly rhetorical Latin. Since their discovery in the late twentieth century, the Letters of Two Lovers have aroused much attention because of their extreme rarity. They constitute the longest correspondence by far between any two persons from the entire Middle Ages, and they are private rather than institutional—which means that, according to all we know about the transmission of medieval letters, they should not have survived at all. Adding to their mystery, the letters are copied anonymously in a single late fifteenth-century manuscript, although their style and range of reference place them squarely in the early twelfth century.

Can this collection of correspondence be the previously lost love letters of Abelard and Heloise? And even if not, what does it tell us about the lived experience of love in the twelfth century?

Barbara Newman contends that these teacher-student exchanges bear witness to a culture that linked Latin pedagogy with the practice of ennobling love and the cult of friendship during a relatively brief period when women played an active part in that world. Newman presents a new translation of these extraordinary letters, along with a full commentary and two extended essays that parse their literary and intellectual contexts and chart the course of the doomed affair. Included, too, are two other sets of twelfth-century love epistles, the Tegernsee Letters and selections from the Regensburg Songs. Taken together, they constitute a stunning contribution to the study of the history of emotions by one of our most prominent medievalists.

Preface
Prolegomena
—Making Love in the Twelfth Century: An Essay in the History of Emotions
—Abelard and Heloise? Some Frequently Asked Questions

"Newman is not only a prominent expert on Abelard and Heloise but also a brilliant translator. Her English is sparkling and elegant. . . . With its extensive commentaries and wealth of accompanying scholarly material, the book is an academic's or student's dream: an affordable bibliophile's volume, gorgeously printed on high-quality paper, with all the explanatory extras one could wish for, and not a single comma out of place."—Times Literary Supplement

"Only a scholar like Barbara Newman, with vast experience in medieval amatory literature, could accomplish what she has in this new translation and commentary on the twelfth-century 'Letters of Two Lovers.'"—Comitatus

"This rich contribution to ongoing debate about the 'Letters of Two Lovers' is essential reading for scholars interested not only in Abelard and Heloise but also the Loire poets, Ovid in the Middle Ages, female authorship, literary letter-writing and history of the emotions. At the same time, it generously opens up these topics-central to the study of the literature of the twelfth century-to a broader readership."—Elizabeth Tyler, University of York

"Making Love in the Twelfth Century showcases Barbara Newman's fine poetic sensibility and acute detective skills as she explores the secrets of a literary treasure of the twelfth century. In the course of rediscovering the Epistolae duorum amantium (Letters of Two Lovers) she makes the Latin literary culture of the High Middle Ages newly visible to us in all of its emotional intensity and formal beauty. This is far more than a translation and commentary: it is at once a distinctive contribution to literary history and a triumphant celebration of the literature of love."—Rita Copeland, University of Pennsylvania

"With grace and learning, Barbara Newman illuminates the emotional and textual communities that created the Letters of Two Lovers and similar works of art and love. The translations are glowing, and Newman's introduction and commentaries essential-not only for medievalists but also for anyone interested in amorous attachments. And who is not?"—Barbara H. Rosenwein, Loyola University Chicago

"Barbara Newman's Making Love in the Twelfth Century makes a love affair in progress visible to the reader and shows the 'making'-that is, composing-of love within a discursive tradition."—C. Stephen Jaeger, University of Illinois at Urbana-Champaign