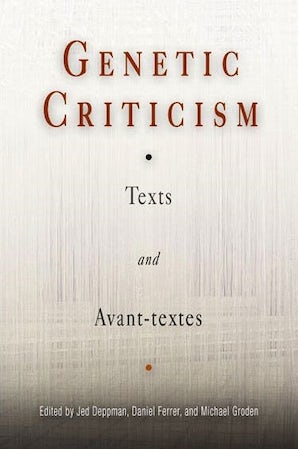 This volume introduces English speakers to genetic criticism, arguably the most important critical movement in France today. In recent years, French literary scholars have been exploring the interpretive possibilities of textual history, turning manuscript study into a recognized form of literary criticism. They have clearly demonstrated that manuscripts can be used for purposes other than establishing an accurate text of a work.

Although its raw material is a writer's manuscripts, genetic criticism owes more to structuralist and poststructuralist notions of textuality than to philology and textual criticism. As Genetic Criticism demonstrates, the chief concern is not the "final" text but the reconstruction and analysis of the writing process. Geneticists find endless richness in what they call the "avant-texte": a critical gathering of a writer's notes, sketches, drafts, manuscripts, typescripts, proofs, and correspondence. Together, the essays in this volume reveal how genetic criticism cooperates with such forms of literary study as narratology, linguistics, psychoanalysis, sociocriticism, deconstruction, and gender theory.

Genetic Criticism contains translations of eleven essays, general theoretical analyses as well as studies of individual authors such as Flaubert, Proust, Joyce, Zola, Stendhal, Chateaubriand, and Montaigne. Some of the essays are foundational statements, while others deal with such recent topics as noncanonical texts and the potential impact of hypertext on genetic study. A general introduction to the book traces genetic criticism's intellectual history, and separate introductions give precise contexts for each essay.

This handsome volume gathers together eleven essays, none previously translated, of what is called la critique génétique (or genetic criticism) for an Anglo-American audience. . . . The essays collected here . . . are all strong and, when taken together, they form a representative sampling of the vitality and range of genetic criticism. Variants

This collection of essays aims to introduce English speakers to one of the most important critical trends in France today: genetic criticism, the study of writers' manuscripts. The volume's editors have paid meticulous attention to presenting and framing the material. The comprehensive introduction by Daniel Ferrer and Michael Groden outlines genetic criticism's intellectual history and the conditions that have favored its development in France. Jed Deppman gives additional background for each individual chapter, and explanatory notes provide further clarification on points that might be obscure to readers unfamiliar with the French literary and critical context. The eleven translated essays offer a fascinating glimpse of the objects of study; some include copies of actual manuscript pages . . . while others use transcriptions. Romanic Review