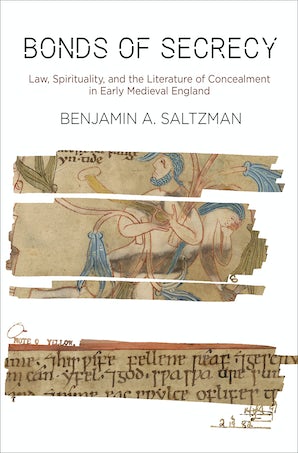 Law, Spirituality, and the Literature of Concealment in Early Medieval England

by Benjamin A. Saltzman

What did it mean to keep a secret in early medieval England? It was a period during which the experience of secrecy was intensely bound to the belief that God knew all human secrets, yet the secrets of God remained unknowable to human beings. In Bonds of Secrecy, Benjamin A. Saltzman argues that this double-edged conception of secrecy and divinity profoundly affected the way believers acted and thought as subjects under the law, as the devout within monasteries, and as readers before books. One crucial way it did so was by forming an ethical relationship between the self and the world that was fundamentally different from its modern reflex. Whereas today the bearers of secrets might be judged for the consequences of their reticence or disclosure, Saltzman observes, in the early Middle Ages a person attempting to conceal a secret was judged for believing he or she could conceal it from God. In other words, to attempt to hide from God was to become ensnared in a serious sin, but to hide from the world while deliberately and humbly submitting to God's constant observation was often a hallmark of spiritual virtue.

Looking to law codes and religious architecture, hagiographies and riddles, Bonds of Secrecy shows how legal and monastic institutions harnessed the pervasive and complex belief in God's omniscience to produce an intense culture of scrutiny and a radical ethics of secrecy founded on the individual's belief that nothing could be hidden from God. According to Saltzman, this ethics of secrecy not only informed early medieval notions of mental activity and ideas about the mind but also profoundly shaped the practices of literary interpretation in ways that can inform our own contemporary approaches to reading texts from the past.

A Note on References and Translations
List of Abbreviations

PART II. SPIRITUALITY
Chapter 3. Monastic Life and the Regulation of Secrecy
Chapter 4. Making Space for Spiritual Secrecy
Chapter 5. Seeing in Secret: Saints, Hagiography, and the Ethics of Concealment and Discovery

"Saltzman’s book is impressive in its range, compelling in its argument, and significant in its contribution. I twill undoubtedly remain a touchstone for scholarship on early medieval notions of agency, interiority, and legal identity for a long time to come."—Speculum

"Highly original, Bonds of Secrecy reveals something that has been hidden in plain sight throughout a wide variety of texts and makes a significant impact on our understanding of historical and narrative motivations. Benjamin A. Saltzman succeeds in clearing away presentist mental furniture to reveal what secrecy meant to Anglo-Saxons who understood it to be inseparable from divine omniscience."—Leslie Lockett, The Ohio State University