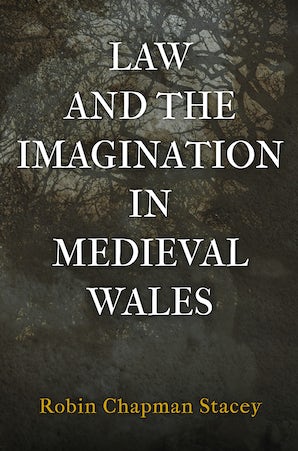 Law and the Imagination in Medieval Wales

In Law and the Imagination in Medieval Wales, Robin Chapman Stacey explores the idea of law as a form of political fiction: a body of literature that blurs the lines generally drawn between the legal and literary genres. She argues that for jurists of thirteenth-century Wales, legal writing was an intensely imaginative genre, one acutely responsive to nationalist concerns and capable of reproducing them in sophisticated symbolic form. She identifies narrative devices and tropes running throughout successive revisions of legal texts that frame the body as an analogy for unity and for the court, that equate maleness with authority and just rule and femaleness with its opposite, and that employ descriptions of internal and external landscapes as metaphors for safety and peril, respectively.

Historians disagree about the context in which the lawbooks of medieval Wales should be read and interpreted. Some accept the claim that they originated in a council called by the tenth-century king Hywel Dda, while others see them less as a repository of ancient custom than as the Welsh response to the general resurgence in law taking place in western Europe. Stacey builds on the latter approach to argue that whatever their origins, the lawbooks functioned in the thirteenth century as a critical venue for political commentary and debate on a wide range of subjects, including the threat posed to native independence and identity by the encroaching English; concerns about violence and disunity among the native Welsh; abusive behavior on the part of native officials; unwelcome changes in native practice concerning marriage, divorce, and inheritance; and fears about the increasing political and economic role of women.

Conclusion. Law and the Imagination

"Splendid . . . Law and the Imagination in Medieval Wales should effect a permanent widening of the imaginations of historians approaching medieval Wales. It deservedly won the Francis Jones Prize for the best book on Welsh history of any period published in 2018, but it should also be read by historians for whom Wales is only a passing interest. Not only does it display a high quality of imaginative perception but it is beautifully written."—Speculum

"Law and the Imagination in Medieval Wales is an impressive book that offers stunning new ways of reading Welsh law. It challenges historians to attend to the literary aspects of Welsh lawbooks, while inviting literary scholars to approach Welsh law as imaginative literature in its own right, and not simply as source texts consulted to solve literary cruces."—American Historical Review

"Only a scholar of Robin Chapman Stacey's caliber could have produced such a scholarly work as this. She has broadened and deepened our understanding of not just the Welsh legal texts, but also the ways in which the literary texts interact with and inform our understanding of the laws. By combining both points of view, new ways of interpreting both types of texts emerge. The analytical model presented here will inform future generations of scholars both within and outside the field of Welsh law."—North American Journal of Celtic Studies

"A field-changing book. Robin Chapman Stacey's approach not only offers a valuable corrective to those histories that treat legal texts as straightforward representations of practice; it also gets us out of the mire of speculation about lost manuscripts, dating, and provenance."—Emily Steiner, University of Pennsylvania

"Drawing on research into the poetry, narrative, and biography of the period, as well as its law and literature, Robin Chapman Stacey argues that the corpus of medieval Welsh Law known as Cyfraith Hywel Dda is a political document emerging from a changing thirteenth-century Wales in which the nobility and learned classes felt themselves and their traditions threatened by English cultural influence and political power on one hand, and the expanding pretensions of Welsh princes on the other."—Catherine McKenna, Harvard University