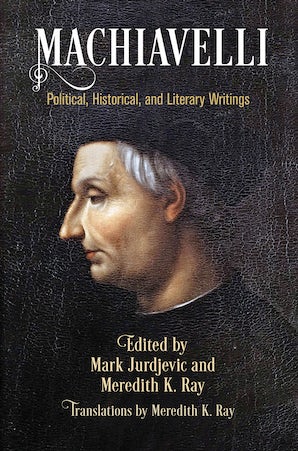 Throughout his life, Niccolò Machiavelli was deeply invested in Florentine culture and politics. More than any other priority, his overriding central concerns, informed by his understanding of his city's history, were the present and future strength and independence of Florence. This volume highlights and explores this underappreciated aspect of Machiavelli's intellectual preoccupations.

Transcending a narrow emphasis on his two most famous works of political thought, The Prince and the Discourses on Livy, Mark Jurdjevic and Meredith K. Ray instead present a wide sample of the many genres in which he wrote—not only political theory but also letters, poetry, plays, comedy, and, most substantially, history. Throughout his writing, the city of Florence was at the same time his principal subject and his principal context. Florentine culture and history structured his mental landscape, determined his idiom, underpinned his politics, and endowed everything he wrote with urgency and purpose.

The Florentine particulars in Machiavelli's writing reveal aspects of his psyche, politics, and life that are little known outside of specialist circles—particularly his optimism and idealism, his warmth and humor, his capacity for affection and loyalty, and his stubborn, enduring republicanism. Machiavelli: Political, Historical, and Literary Writings has been carefully curated to reveal those crucial but lesser known aspects of Machiavelli's thought and to show how his major arguments evolved within a dynamic Florentine setting.

Note on Translation and Selection of Texts

"The edition by Mark Jurdjevic and Meredith K. Ray, with translations by Ray, is an excellent volume of political, historical, and literary works by one of the great thinkers and writers of the Renaissance."—Renaissance and Reformation

"Including letters, dramatic works, and other texts that do not often come first to readers' minds when thinking of Machiavelli, Mark Jurdjevic and Meredith K. Ray have provided a selection of his work that paints a new and interesting portrait of the political theorist. Arranged chronologically, these lesser-known texts frame excerpts from The Prince, Discourses on Livy, and The Art of War, resulting in a finely grained intellectual autobiography. The volume is perfect for the classroom and for readers interested in gaining a fuller understanding of Machiavelli's thought."—Christopher S. Celenza, Georgetown University