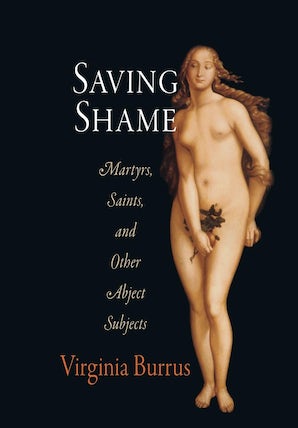 Martyrs, Saints, and Other Abject Subjects

Virginia Burrus explores one of the strongest and most disturbing aspects of the Christian tradition, its excessive preoccupation with shame. While Christianity has frequently been implicated in the conversion of ancient Mediterranean cultures from shame- to guilt-based and, thus, in the emergence of the modern West's emphasis on guilt, Burrus seeks to recuperate the importance of shame for Christian culture. Focusing on late antiquity, she explores a range of fascinating phenomena, from the flamboyant performances of martyrs to the imagined abjection of Christ, from the self-humiliating disciplines of ascetics to the intimate disclosures of Augustine.

Burrus argues that Christianity innovated less by replacing shame with guilt than by embracing shame. Indeed, the ancient Christians sacrificed honor but laid claim to their own shame with great energy, at once intensifying and transforming it. Public spectacles of martyrdom became the most visible means through which vulnerability to shame was converted into a defiant witness of identity; this was also where the sacrificial death of the self exemplified by Christ's crucifixion was most explicitly appropriated by his followers. Shame showed a more private face as well, as Burrus demonstrates. The ambivalent lure of fleshly corruptibility was explored in the theological imaginary of incarnational Christology. It was further embodied in the transgressive disciplines of saints who plumbed the depths of humiliation. Eventually, with the advent of literary and monastic confessional practices, the shame of sin's inexhaustibility made itself heard in the revelations of testimonial discourse.

In conversation with an eclectic constellation of theorists, Burrus interweaves her historical argument with theological, psychological, and ethical reflections. She proposes, finally, that early Christian texts may have much to teach us about the secrets of shame that lie at the heart of our capacity for humility, courage, and transformative love.

"[Burrus's] findings . . . will give scholars pause to rethink some of the fundamental assumptions that we often bring to the study of this topic and period. Her work shows that there is still plenty of intellectual room to roam in the landscape of Greco-Roman and late antique Christian scholarship."—The Medieval Review

"Burrus presents a provocative thesis that should encourage scholars to rethink their readings of early Christian sources. Her use of the shame-pride axis successfully demonstrates that Christians embraced shame and transformed it into a distinct form of identity politics. Additionally, she effectively illustrates that confessions were exhibitions of Christian shame designed to temper numerous sins, including pride, in hope of receiving God's loving mercy."—Speculum

"The sophistication of [Burrus's] interdisciplinary research on shame in affect psychology and related social scientific disciplines is readily self-evident. Saving Shame is a cogent apologia for reinterpreting the multiple faces of shame not only for historians of antiquity and early church history, but for social and intellectual historians of medieval, early modern, and modern church history as well as for historical theologians."—Sixteenth Century Journal