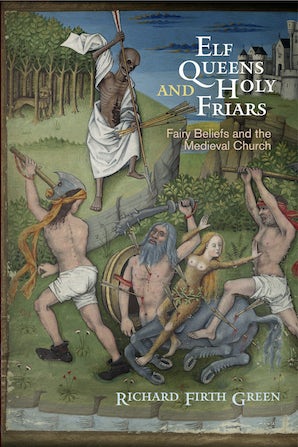 Fairy Beliefs and the Medieval Church

In Elf Queens and Holy Friars Richard Firth Green investigates an important aspect of medieval culture that has been largely ignored by modern literary scholarship: the omnipresent belief in fairyland.

Taking as his starting point the assumption that the major cultural gulf in the Middle Ages was less between the wealthy and the poor than between the learned and the lay, Green explores the church's systematic demonization of fairies and infernalization of fairyland. He argues that when medieval preachers inveighed against the demons that they portrayed as threatening their flocks, they were in reality often waging war against fairy beliefs. The recognition that medieval demonology, and indeed pastoral theology, were packed with coded references to popular lore opens up a whole new avenue for the investigation of medieval vernacular culture.

Elf Queens and Holy Friars offers a detailed account of the church's attempts to suppress or redirect belief in such things as fairy lovers, changelings, and alternative versions of the afterlife. That the church took these fairy beliefs so seriously suggests that they were ideologically loaded, and this fact makes a huge difference in the way we read medieval romance, the literary genre that treats them most explicitly. The war on fairy beliefs increased in intensity toward the end of the Middle Ages, becoming finally a significant factor in the witch-hunting of the Renaissance.

"Much has been written on medieval fairies in the past twenty years or so, but in Elf Queens and Holy Friars Green succeeds triumphantly in bringing new insights and thoughtful analysis to their history and their metamorphoses into divergent forms, as the early modern world begins to take shape."—The Times Literary Supplement

"As a guide to the traditions of Britain and France, [Green's] can't be surpassed. This is cultural history from below, not the usual top-down perspective. . . . It is not only original, sensible and deeply researched but accessible. Not only medievalists will actively enjoy reading it."—London Review of Books

"This wonderful book is a rare example of work which is genuinely interdisciplinary, making an equal contribution to our understanding of medieval romance literature, Western Christian theology and medieval Western European cultural history. It does this by bringing together two different bodies of source material-the romances and the writings of medieval churchmen-in both of which the author is equally expert. The result is a whole series of exciting new insights, centred on the theme of fairyland as a contested site in a struggle between official and unofficial cultures in the high and late Middle Ages."—Time and Mind

"A new book by Richard Firth Green is always a significant event, and this one, surveying fairy beliefs in the Middle Ages, is set to become the work of first recourse on the subject. It is scholarly, meticulously researched beyond the limits of all the more familiar examples, and is in many respects a profoundly revisionary account of such beliefs. It deserves to be read not just by folklorists and critics of those medieval romances in which fairies figure, but by cultural, social, and intellectual historians, theologians, and historians of witchcraft."—Speculum

"Elf Queens and Holy Friars is a lucid, rich and engrossing book. Green sustains his case for the contingency and variety of medieval fairy beliefs, while also making a coherent and compelling argument about medieval clerical approaches to such beliefs. The study is likely to become a staple of reading lists across a number of areas of literary and cultural history; however, its appeal should extend well beyond the academy. Elf Queens and Holy Friars is a deeply learned book, but it wears that learning lightly; there is much here for readers new to this field to enjoy, not least the sheer entertainment value of many medieval fairy accounts."—Literature & History

"Although I have brushed up against suggestions of fairy lore and activity many times in the materials with which I work, I have taken them for granted up to now, which also means I did not think very hard about them. Reading this book has illuminated a large expanse of material much more deeply and intimately than I imagined possible."—Claire Fanger, Rice University