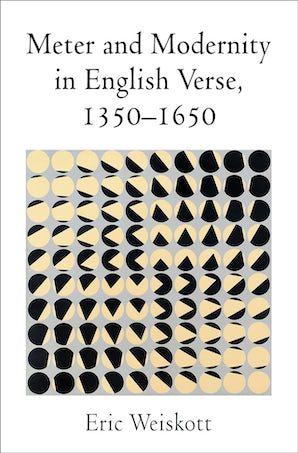 What would English literary history look like if the unit of measure were not the political reign but the poetic tradition? The earliest poems in English were written in alliterative verse, the meter of Beowulf. Alliterative meter preceded tetrameter, which first appeared in the twelfth century, and tetrameter in turn preceded pentameter, the five-stress line that would become the dominant English verse form of modernity, though it was invented by Chaucer in the 1380s. While this chronology is accurate, Eric Weiskott argues, the traditional periodization of literature in modern scholarship distorts the meaning of meters as they appeared to early poets and readers.

In Meter and Modernity in English Verse, 1350-1650, Weiskott examines the uses and misuses of these three meters as markers of literary time, "medieval" or "modern," though all three were in concurrent use both before and after 1500. In each section of the book, he considers two of the traditions through the prism of a third element: alliterative meter and tetrameter in poems of political prophecy; alliterative meter and pentameter in William Langland's Piers Plowman and early blank verse; and tetrameter and pentameter in Chaucer, his predecessors, and his followers. Reversing the historical perspective in which scholars conventionally view these authors, Weiskott reveals Langland to be metrically precocious and Chaucer metrically nostalgic.

More than a history of prosody, Weiskott's book challenges the divide between medieval and modern literature. Rejecting the premise that modernity occurred as a specifiable event, he uses metrical history to renegotiate the trajectories of English literary history and advances a narrative of sociocultural change that runs parallel to metrical change, exploring the relationship between literary practice, social placement, and historical time.

List of Abbreviations
Note on Quotations and Scansion
Preface

Introduction. Modernity: The Problem of a History

Conclusion. From Archive to Canon

"This smart, inventive, and fastidiously researched book makes a case for a new relationship among meter, genre, and literary periodization in English poetry…Weiskott is a metricist and philologist of omnivorous learning…The new formalism exemplified by Weiskott requires far more thoughtfulness than the old New Criticism; it requires a far greater knowledge than the New Historicism..[S]cholarship at its most exact and provocative."—Studies in the Age of Chaucer

Meter and Modernity in English Verse...is an argument against the accepted periodization that would draw a firm line between the 'medieval' and the 'modern.' It is a pitch on behalf of an English genre that lasted from the mid-fifteenth to the mid seventeenth century, political prophecy in verse. And it is an account of the major metrical traditions in English from the mid-thirteenth to the twentieth century...[A]n endeavor that shines a light on verse practice and raises the stakes of metrical enquiry.

Eric Weiskott has written a searching, ambitious book with significant implications for our thinking about literary-historical time. Besides its obvious relevance to scholars studying poetics across later Middle English and early modern English, Meter and Modernity should also engage a wider range of readers. It investigates how verse-craft in any time might relate to human experience, and to regional, national, and transnational cultural formation. The book also, though, explores how we organise literary research and teaching. It would be good, and also a fitting implementation of the thrust of Weiskott’s arguments, if scholars who think of themselves as working on periods other than “the medieval” read this book...[The book] lays out a new landscape of value for early English literature.

"Weiskott brings decades of metrical scholarship on prosody into focus to demystify pentameter's prestige. With deep linguistic and archival knowledge, his book writes new plural histories of English verse forms for early periods in which there is little explicit poetics or meta-prosodic reflection...His book answers the pressing need for poetics to find rigorous methods for moving between time periods with truly divergent and non-'modern' literary cultures...Weiskott marries archival, philological, metrical, and disciplinary awareness in what should be required reading for all medievalists and prosodists."—Modern Language Review

"In Meter and Modernity in English Verse, Eric Weiskott offers a stunning example of metrical inquiry at its finest in a study of a neglected genre that, from its modest corner of the literary world, poses daring and difficult questions about how we organize knowledge in a 'virtual field of play both constraining and responsive to the continuous history of cultural decision-making' In the process, Weiskott presents an alternative history of literature free from the warping effects of periodization. Gracefully blending Bourdieuan theory with linguistic and archival evidence, Weiskott recenters a marginalized genre—the political prophecy—among intersecting metrical cultures in England from the fourteenth to the seventeenth century. Exquisite codicological analysis complements precise philological reasoning in a probing audit of the methods of historical-literary scholarship. Through three parts and eleven chapters, Weiskott mounts an erudite, even soulful interrogation of the limitations of periodization on our understanding of, and relationship to and with, the dynamic practices of early English metrical communities."—Arthuriana

"[A] timely intervention in the intellectual project of rethinking the medieval-modern divide in literary and cultural history...Written with lucidity, intellectual breadth, and philological rigor, Meter and Modernity demonstrates that medieval and modern are inadequate terms to think about meter."—Renaissance Quartlery

"Eric Weiskott saves us from reading the history of English poetry as a narrative in which formal, thematic, and linguistic developments keep step across a progress of periods. Meter, in its own diversity-the asynchronous rise and fall of its many kinds-proves to be an ideal instrument for disaggregating the rates and durations of change across many domains."—Jeff Dolven, Princeton University