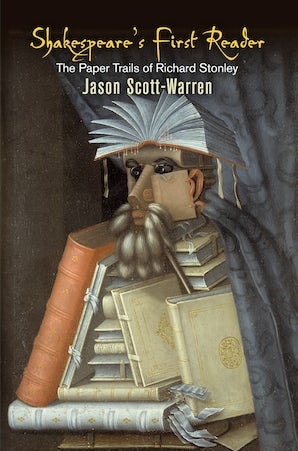 The Paper Trails of Richard Stonley

Richard Stonley has all but vanished from history, but to his contemporaries he would have been an enviable figure. A clerk of the Exchequer for more than four decades under Mary Tudor and Elizabeth I, he rose from obscure origins to a life of opulence; his job, a secure bureaucratic post with a guaranteed income, was the kind of which many men dreamed. Vast sums of money passed through his hands, some of which he used to engage in moneylending and land speculation. He also bought books, lots of them, amassing one of the largest libraries in early modern London.

In 1597, all of this was brought to a halt when Stonley, aged around seventy-seven, was incarcerated in the Fleet Prison, convicted of embezzling the spectacular sum of £13,000 from the Exchequer. His property was sold off, and an inventory was made of his house on Aldersgate Street. This provides our most detailed guide to his lost library. By chance, we also have three handwritten volumes of accounts, in which he earlier itemized his spending on food, clothing, travel, and books. It is here that we learn that on June 12, 1593, he bought "the Venus & Adhonay per Shakspere"—the earliest known record of a purchase of Shakespeare's first publication.

In Shakespeare's First Reader, Jason Scott-Warren sets Stonley's journals and inventories of goods alongside a wealth of archival evidence to put his life and library back together again. He shows how Stonley's books were integral to the material worlds he inhabited and the social networks he formed with communities of merchants, printers, recusants, and spies. Through a combination of book history and biography, Shakespeare's First Reader provides a compelling "bio-bibliography"—the story of how one early modern gentleman lived in and through his library.

Preface
A Note on Conventions

Introduction. Material Readers
Chapter 1. Shopping for Shakespeare
Chapter 2. Accounting for the Self
Chapter 3. On Aldersgate Street
Chapter 4. People of the Book
Chapter 5. Paper Travels
Chapter 6. A Booke in Commendacion of the Ladye Branche
Chapter 7. Meet the Chillesters
Chapter 8. Reading in the Fleet
Conclusion

"The facts of Richard Stonley's life are lucidly set out by Felicity Heal in the Oxford Dictionary of National Biography. Jason Scott-Warren's book offers something else. The dust jacket features Arcimboldo's painting 'The Librarian', which depicts a man made out of books. Shakespeare's First Reader is in part the literary equivalent. It is a fascinating blend of book history, biography and cultural history, and, like Arcimboldo's pictorial compilation, both vivid and original."—The Times Literary Supplement

"[A] lively account of the first person known to have purchased a printed book by Shakespeare, the popular narrative poem Venus and Adonis . . . In Scott-Warren's engrossing and imaginative Shakespeare's First Reader, he sleuths through a vast inventory of household objects and journals with unrivalled, archival expertise and originality to reveal how Stonley's emotional and financial life was constituted by his treasured, relic-like books . . . Like Shakespeare's poem Venus and Adonis, Scott-Warren's book is a delight."—Reception: Texts, Readers, Audiences, History

Although Richard Stonley is fairly well known to scholarship, the full range of available documentation for this Elizabethan worthy has not been exploited until now. The principal focus of Shakespeare’s First Reader being bibliographical, Scott-Warren’s chief sources for Stonley’s library are the inventory of Stonley’s house in Aldersgate, with more than four hundred book titles...Shakespeare’s First Reader is a “must have”—or at least a “must read”—for anyone interested in printed books, private libraries, readership, social history, or prison literature from the time of Elizabeth I.

"Jason Scott-Warren presents us with a compelling portrait not just of one man but of a key moment in England's literary past. Through a gradual accumulation of evidence, he creates a picture of early modern book culture that is richer, stranger, and more important than the possibility of pinning down who read Shakespeare first, or even how Shakespeare was received. A superb read, packed with gems."—Helen Smith, University of York

"A learned, wide-ranging, witty, and meticulous examination and example of life-writing."—Adam G. Hooks, University of Iowa