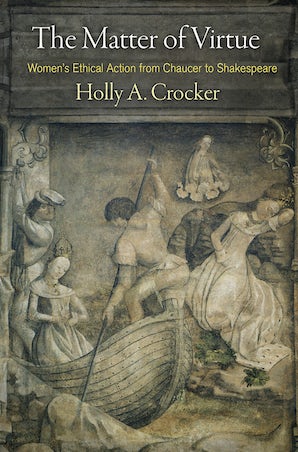 The Matter of Virtue

by Holly A. Crocker

If material bodies have inherent, animating powers—or virtues, in the premodern sense—then those bodies typically and most insistently associated in the premodern period with matter—namely, women—cannot be inert and therefore incapable of ethical action, Holly Crocker contends. In The Matter of Virtue, Crocker argues that one idea of what it means to be human—a conception of humanity that includes vulnerability, endurance, and openness to others—emerges when we consider virtue in relation to modes of ethical action available to premodern women. While a misogynistic tradition of virtue ethics, from antiquity to the early modern period, largely cast a skeptical or dismissive eye on women, Crocker seeks to explore what happened when poets thought about the material body not as a tool of an empowered agent whose cultural supremacy was guaranteed by prevailing social structures but rather as something fragile and open, subject but also connected to others.

After an introduction that analyzes Hamlet to establish a premodern tradition of material virtue, Part I investigates how retellings of the demise of the title female character in Chaucer's Troilus and Criseyde, Henryson's Testament of Cresseid, and Shakespeare's Troilus and Cressida among other texts structure a poetic debate over the potential for women's ethical action in a world dominated by masculine violence. Part II turns to narratives of female sanctity and feminine perfection, including ones by Chaucer, Bokenham, and Capgrave, to investigate grace, beauty, and intelligence as sources of women's ethical action. In Part III, Crocker examines a tension between women's virtues and household structures, paying particular attention to English Griselda- and shrew-literatures, including Shakespeare's Taming of the Shrew. She concludes by looking at Chaucer's Legend of Good Women to consider alternative forms of virtuous behavior for women as well as men.

"The Matter of Virtue is courageous, temperate, just, and discerning, and it is also constant, faithful, patient, and full of hope. Crocker orchestrates the cardinal virtues, their theological addenda, and their feminine supplements to compose a renewed virtue discourse sustained by feminist philosophy, literary studies, and the history of ideas. Crocker has produced a major work that persuasively demonstrates the affordances of virtue across medieval and early modern studies, with implications for how we study, teach, and work, as well as nurse, heal, and love today."—Renaissance Quarterly

"The Matter of Virtue participates in the much-needed re-embracement of feminist scholarship currently taking place in medieval and early modern studies, and is also informed by recent theoretically inflected work on affect, eco-criticism, and the post-human. Yet its unique and prescient focus on virtuous human work is especially relevant to the pandemic crisis, as the model for ethical living it explores applies well to further crises, from the #MeToo movement to Black Lives Matter to the imperatives of climate change. In short, this revisionist study of Chaucer and Shakespeare comes at a good time… [R]eaders will find within this book a set of richly contextualized paradigms that chart a way forward for a new 'ethical turn' to literary studies."—Speculum

"At the heart of Holly A. Crocker’s study of premodern virtues lies a posthumanist project that prompts feminist reimaginings of embodied excellence in English vernacular poetics from 1343 through 1623…Crocker’s book leaves us with a critical posthuman feminist call to action that requires each generation of premodern and early modern scholars to rethink and reimagine embodied ways of ethically being in the world together."—Comitatus

"In The Matter of Virtue, Holly A. Crocker offers a gendered history of virtue. Her complex account rests on the claim that the understanding of ethical virtue was sharply transformed in the High Middle Ages...The book is bracing: Crocker generalizes with convincing confidence, quoting and illustrating to drive her argument forward, and not merely to confirm and settle it."—SEL Studies in English Literature 1500-1900

"Attending to the full premodern meaning of virtue as well as to recent feminist philosophy, Holly A. Crocker offers an essential new account of ethical life legible in English texts written during the period of transition from late medieval to early modern. The Matter of Virtue is a timely intervention in the history of literary reading that helps us rethink the gendered ecologies of ethics and virtue."—Patricia Clare Ingham, University of Indiana, Bloomington

"Producing compelling readings of canonical texts and contextualizing the texts among a wealth of theological writings, conduct books, and household management manuals, The Matter of Virtue substantially contributes to feminist scholarship on gender prescriptions, marital relations, and female agency in medieval and early modern literature. Holly A. Crocker convincingly argues that traditional feminine traits such as obedience and endurance should not be diminished or dismissed as passivity but should be regarded as active performances of an embodied ethics of vulnerability."—Mario DiGangi, Lehman College and CUNY Graduate Center