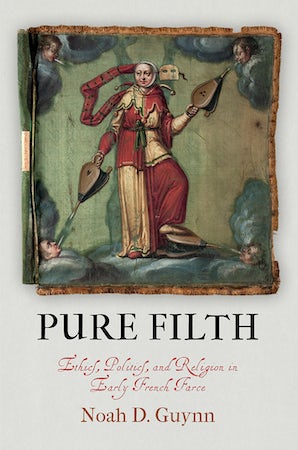 As Noah D. Guynn observes, early French farce has been summarily dismissed as filth for centuries. Renaissance humanists, classical moralists, and Enlightenment philosophes belittled it as an embarrassing reminder of the vulgarity of medieval popular culture. Modern literary critics and theater historians often view it as comedy's poor relation—trite, smutty pap that served to divert the masses and to inure them to lives of subservience. Yet, as Guynn demonstrates in his reexamination of the genre, the superficial crudeness and predictability of farce belie the complexities of its signifying and performance practices and the dynamic, contested nature of its field of reception. Pure Filth focuses on overlooked and occluded content in farce, arguing that apparently coarse jokes conceal finely drawn, and sometimes quite radical, perspectives on ethics, politics, and religion.

Engaging with cultural history, political anthropology, and critical, feminist, and queer theory, Guynn shows that farce does not pander to the rabble in order to cultivate acquiescence or curb dissent. Rather, it uses the tools of comic theater—parody and satire, imitation and exaggeration, cross-dressing and masquerade—to address the urgent issues its spectators faced in their everyday lives: economic inequality and authoritarian rule, social justice and ethical renewal, sacramental devotion and sacerdotal corruption, and heterosocial relations and household politics. Achieving its subtlest effects by employing the lewdest forms of humor, farce reveals that aspirations to purity, whether ethical, political, or religious, are inevitably mired in the very filth they repudiate.

A Note on Sources

Noah D. Guynn is Professor of French and Comparative Literature at the University of California, Davis.

"[A] brilliant study . . . In Pure Filth, a book that will become a standard reference for people studying farce, Guynn has brought new life and energy to seemingly innocuous plays, showing his readers that the concerns addressed in farce are our concerns, that farceurs were engaged in a serious battle against repressive authority and hegemonic practices."—EuropeNow

"This is a major study of a sizable body of texts that has tended to be marginalized in mainstream literary studies. Using an array of theoretical tools (poststructuralist, anthropological, feminist, and queer), Noah D. Guynn offers a sophisticated and subtle view of works more often perceived as having little literary merit and sometimes rather crudely read through a functionalist lens."—Simon Gaunt, King's College London